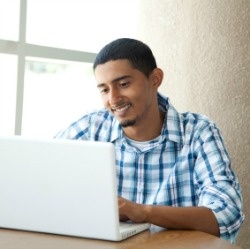 After years of lagging behind other Americans, Hispanics have made progress when it comes to attending college, a Pew Hispanic Research Center analysis of U.S. Census data showed. With nearly 7 out of 10 Hispanic high school graduates heading to college in 2012, college enrollment for this group was the highest it's been in 30 years − compared to the fewer than 50 percent of Latinos who enrolled in 2000, NBC Latino reported.

Currently, Latinos are also more likely to enroll in college when compared with their peers of other races; in 2012, enrolled Hispanics surpassed whites by two percentage points and African Americans by six. Furthermore, the number of Hispanics who drop out of high school has decreased since 2000, ABC News noted. In 2000, 28 percent of Hispanics between ages 16 and 24 quit high school; in 2011, 14 percent did.

"Since 1980, Hispanics were less likely to pursue college compared to whites, until this year, where it seems the gap has narrowed," said Richard Fry, the lead author of the study, according to NBC Latino.

Another possible explanation is the prevalent attitude among Hispanics that a college education is essential. A separate Pew study revealed 88 percent of Latinos believe a college degree is key to advancing in life. Researchers attributed the rise in Hispanic college enrollment to The Great Recession and the resulting difficulty high school graduates had landing jobs, NBC Latino reported. Since 2007, the unemployment rate for Latinos aged 16 to 24 has increased 7 percent whereas for whites, it increased 5 percent.

"The wider Latino community understands the importance of education for the future of education when it comes to advancing future generations," Fry told NBC Latino.

Despite Hispanics' increased rate of college enrollment, gaps remain between this cohort and other demographics, The New York Times noted. They are less likely than their white, black and Asian counterparts to attend four-year or select colleges, more often going to community colleges. Whereas 72 percent of whites enroll in four-year schools, 56 percent of Hispanics do.

"This is the maturation of a big second generation among Latinos -- native born and educated in American schools," Fry told The New York Times.

Top colleges offer scholarships that would make those schools as affordable as public ones, but these financial aid opportunities are not reaching high-achieving, low-income students, ABC News noted. A recent study found that basic outreach to those students and their families greatly impacts their enrollment at elite schools. While college enrollment numbers among Hispanics are high, completion rates are lower than those of other groups, signaling more work needs to be done.

"This is a good indicator, but there is still an educational gap," Fry told NBC Latino.