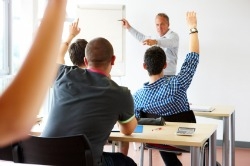 A new study may redefine how education officials measure teacher effectiveness in the classroom, according to research results released Friday.

The Measures of Effective Teaching Project--a two-year, $45 million research project funded by the Bill and Melinda Gates Foundation--aims to find ways of distinguishing good teachers from bad ones, The Washington Post reported. Among its conclusions was that growth in student test scores is a reliable sign of a good teacher.

"In every grade and subject we studied, a teacher's past success in raising student achievement on state tests was one of the strongest predictors of his or her ability to do it again," said Vicki Phillips, who oversees elementary and secondary education grants for the foundation.

The study's findings indicate that teachers whose students continued to score higher on standardized tests each year--called an instructor's value-added rating--are able to replicate that feat in multiple classrooms in multiple years.

In addition, researchers sought to reach further conclusions by comparing teachers' value-added scores to other data, such as how students perceived teachers in the classroom, The New York Times reported.

Researchers, who surveyed more than 3,000 teachers and their students in various American public school systems, focused on analyzing how students rated their teachers. In particular, students were asked to rate teachers based on how well they maintained classroom order, focused instruction and helped students learn from their mistakes.

The study found that students who gave high ratings to their teachers tended to learn the most in the course of a year, as measured by gains on annual test scores. Interestingly, researchers discovered that classrooms where a majority of students agreed with the statement, "Our class stays busy and doesn't waste time," tended to be led by teachers with high value-added scores.

"Kids know effective teaching when they experience it," Ferguson said. "As a nation, we've wasted what students know about their own classroom experiences instead of using that knowledge to inform school reform efforts."

Some educators, however, criticize the value-added theory because it relies on a student's performance on a single test day, which may not accurately represent what they have learned.

"Student achievement is more than just a test score," D.C. Schools and Washington Teachers' Union President Nathan Saunders told The Washington Examiner. "A test score is just a snapshot of a given day."

Saunders added that other factors affect test scores "such as social conditions beyond a teacher's control that include poverty and family dysfunction."

"What Works in the Classroom? Ask the Students," nytimes.com, December 10, 2010, Sam Dillon