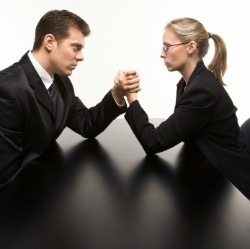 The long-held belief that when competition heats up, boys tend to fare better than girls may have just been turned on its head. A new study published in the Journal of Economic Behavior and Organization indicates that, while boys tend to perform better in one-time math contests, girls perform just as well as or better than boys in math competitions that involve multiple rounds or less stringent time constraints.

According to the new report published by Brigham Young University, University of Miami and Rutgers Business School professors, most literature shows that boys react more favorably to competitive incentives than girls. The problem: That conclusion is drawn mostly from experiments using one-off competitions. This new research suggests that in longer, multiround competitions, the male advantage disappears. In later periods, girls even tend to perform a little better than the boys.

"It's really encouraging that seemingly large gaps disappear just by keeping them in the game longer," said study co-author Joe Price in a press release published by Brigham Young University, where he teaches economics.

The press release reports that researchers created math contests for 24 elementary-age children that included five different rounds. Just as in prior research, boys tended to perform better than girls in the first round. In subsequent rounds, however, girls performed just as well as or better than boys. The authors suggest that because boys' competitive edge is exhausted after the first round, girls who are offered a bit more encouragement in the beginning could ultimately excel.

"We don't know if it's boys getting excited and over-performing or if it's girls being too uncomfortable with the situation," Price said.

According to the press release, researchers went one step further in order to test how both sexes fared when the element of a time limit was removed. The math competition was repeated, but only some students were paired against a classmate to see who could correctly answer the most math questions in a 5-minute period while others were told that time was not a factor. In the former case boys tended to perform better, but where the speed component of the test was de-emphasized, girls competed evenly with boys.

Authors suggest that their findings could have implications in the workplace, too. According to Forbes, there is an ongoing debate about whether the workplace needs to adapt to help women succeed in industries where they are underrepresented, namely science, technology, engineering and math -- or STEM -- careers. These results may bolster the notion that women might benefit from more encouragement in these types of fields.

"You might guess that girls would shy away from competitive work environments," Price said in the BYU press release. "What our results would hint is that if you convince them to stick around and give it a shot, they will acclimate and do just fine."