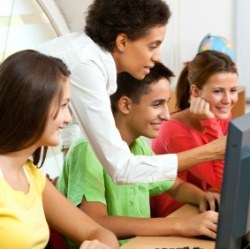 The 2012 ACT National Curriculum Survey showed a significant disparity between the numbers of college freshmen that high school teachers believe are prepared for college and the numbers of professors who think they are. Eighty-nine percent of high school teachers indicated high school students are well or very well prepared for college while just 26 percent of college professors indicated they were, according to The Washington Post.

"When high school teachers believe their students are well prepared for college-level courses, but colleges disagree, we have a problem," Jon Erickson, ACT's president of education, told The Washington Post.

Despite nationwide efforts over recent years to boost college readiness, this year's results mirror those of a previous survey from 2009. The survey is conducted by ACT to help ensure that data is being collected at the high school level, according to an ACT press release. This data is used to assess what is being taught to help prepare graduates for college. It is typically collected every three to five years, according to the release.

This year’s survey included responses from 9,937 educators nationwide, including elementary, middle school and high school teachers as well as college instructors of English, math, reading, science and writing. For the first time this year, elementary-school teachers were surveyed. According to the press release, elementary schools teachers’ responses should be used to help tailor early grade-level assessments to be included as part of ACT Aspire. This is a plan for a long-term K-12 digital assessment system, intended for release in early 2014, that will help teachers and parents better align learning with standards.

"If we are to improve the college and career readiness of our nation's high school graduates, we must make sure that our standards are aligned between high school and college," Erickson told The Washington Post.

The discrepancy in perceived readiness between high school teachers and college professors is likely due to an incongruence between high school and college curricula, the researchers suggested. This could be related to the adoption of the Common Core State Standards by many states (45 so far, in all) in the areas of language arts and math. Education Week noted that many regional and state areas may have work to do in bringing up expectations to meet new college and career-preparation standards.

The ACT press release shared many suggestions for accomplishing this, including having K-12 teachers better understand the skills students need and the standards they should meet for college and/or career preparedness. The press release also suggested that these teachers learn how such skills should be taught and reinforced at each grade level. The report emphasized increased collaboration between K-12 and college educators to accomplish these priorities.

The study also showed that schools need to have improved technology within classrooms to help facilitate computerized testing.

"Wherever possible, states and schools may need to consider channeling limited resources toward ensuring students efficient access to computer technology to prepare for the types of innovative assessments that are likely to accompany implementation of college-and career-ready standards," the report stated, according to Education Week.