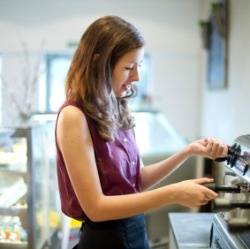 A sluggish job market has placed many college graduates in low-skill positions that do not make much use of their degrees at a time when student debt is at an all-time high. Many economists expected things to get better with an improving economy, but a new report paints a much less optimistic picture.

The report issued Monday by the National Bureau of Economic Research suggests that workforce demand for skilled, high-tech workers is declining even as college students continue to flock to those types of disciplines. Lead author Paul Beaudry, an economist with the University of British Columbia in Vancouver, suggests that new technologies may eventually revive demand for these advanced skills -- just not in the course of the current economic recovery. He also notes that, while the high-tech boom of the 1990s brought many jobs to create and install new technological systems for companies, demand for such skilled positions has declined in recent years, despite the fact that students continue to pursue these fields.

"Once the robots are in place you still need some people, but you need a lot less than when you were putting in the robots," Beaudry told The Wall Street Journal, as reported by Yahoo! Finance.

The paper may spell bad news for millions of college-educated workers who have taken lower-skill positions in coffee shops or retail stores in the absence of other offers. According to The Huffington Post, a Center for College Affordability and Productivity report released in January revealed that 48 percent of recent college graduates work in jobs that do not require college degrees, with 38 percent working in jobs not even requiring a high school diploma. The effect of the skill shift has been widespread, too: As college graduates have moved into lower-skill positions, less-educated workers are often displaced entirely.

Economists have generally assumed that this so-called underemployment problem would be temporary, and that demand would rebound along with the economy, but the new NBER report suggests that the American higher education sector is producing college graduates at a rate that outpaces employer demand.

David Autor, an economist at the Massachusetts Institute of Technology who has studied skill- and education-related issues, told The Wall Street Journal that the report's thesis is "provocative" but "speculative." He said that the wage premiums attributed to a college education haven't grown as quickly during the 2000s as they had in previous decades, but that it is not yet clear whether a surplus of college-educated workers is really to blame or if other factors are at play.

This is not to suggest that pursuing higher education will not translate to a more robust salary. According to The Wall Street Journal, college-educated workers tend to earn more and advance more quickly than their lesser-educated colleagues, even in fields that do not require a degree. Job prospects may be better, too. In February, notes the Journal, the unemployment rate for bachelor's degree holders was 3.8 percent, less than half the 7.9 percent unemployment rate among those with high school diplomas alone.

"College Grads May Be Stuck in Low-Skill Jobs," wsj.com via finance.yahoo.com, March 26, 2013, Ben Casselman for The Wall Street Journal

"The Great Reversal in the Demand for Skill and Cognitive Tasks," nber.org, March 2013, Paul Beaudry, David A. Green, and Benjamin M. Sand, http://www.huffingtonpost.com/2013/03/26/millennial-underemployment-paul-beaudry_n_2955856.html?utm_hp_ref=college&ir=College

"Young College Grads Could Be Stuck With Their Dead-End Jobs Or Worse: Study," huffingtonpost.com, March 26, 2013