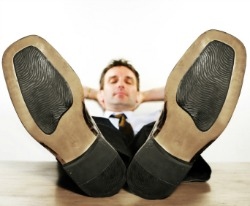 If you feel like that co-worker who looks at cats online all day or submits below-par work seems happier than you, you could be right. In what may be perceived as adding insult to injury, a new study from the consulting firm Leadership IQ suggests that in many companies, low performers are actually more satisfied and engaged with their jobs than their higher-performing colleagues.

According to The Wall Street Journal, the new study finds that in 42 percent of companies, low performers report being more motivated and content at their jobs than middle and high performers. Further, these slackers often overvalue the work they do, rarely aware of their poor performance. Leadership IQ CEO Mark Murphy said the results suggest that many employers do not hold these workers accountable for their work, letting them scrape by unscathed.

"Low performers often end up with the easiest jobs because managers don't ask much of them,"Murphy told The Wall Street Journal. As a result, they are less stressed and more satisfied with their jobs. The trend forces their more dedicated colleagues to work longer hours correcting these underperforming co-workers' work, which can leave them feeling frustrated or disengaged. "They feel stressed and undervalued, and it starts to undermine the high performers' confidence that the organization is a meritocracy," said Murphy.

Murphy told Today that part of the problem may stem from managers who are afraid to confront underperformers, even though their work tends to impact their colleagues -- and their organizations -- negatively. "We see a lot of organizations where managers will even promote a low performer just to get them out of their department," he said.

According to In The Capital, other key findings from the survey do not bode well for higher performing workers. For example, higher performers feel their efforts go largely unrecognized while low performers receive more positive reinforcement. High performers also tend to be more pessimistic about their career trajectories. They may even lose their motivation to do their jobs well: According to Today, a separate, earlier Leadership IQ study found that 93 percent of employees said poor-performing colleagues undermined their own productivity.

Murphy told The Wall Street Journal that to remedy these problems, managers must learn to speak frankly with high and middle performers to identify and resolve frustrations that could cause them to leave the company. Managers must also figure out exactly how to motivate their star employees to stick around.

Leadership IQ looked at data from 207 companies that kept detailed worker performance evaluations and engagement surveys. According to The Wall Street Journal, of the 58 percent of companies in which low performers were not the most engaged, high performers tended to be happiest. Only in the rarest cases were middle performers happiest; according to Murphy, the middle achievers at companies tend to be the group most ignored by managers

"How the Inept Took Over the Workplace," inthecapital.com, April 1, 2013, Anthony Sodd