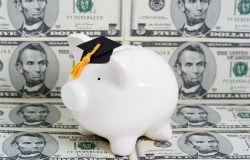 A new report has found that more undergraduates are receiving merit aid, at the same time that need-based aid is being reduced.

The report from the National Center for Education Statistics, titled "Merit Aid for Undergraduates: Trends from 1995-96 to 2007-8," found that a growing number of students are receiving aid from college institutions based on academic achievement, rather than financial need. As reported by Education Week, the NCES study found that 14 percent of students in 2007-8 received merit-based grants, compared with six percent who received aid unrelated to financial need in 1995-96. During that same time, the number of undergraduates receiving need-based aid increased far less, from 32 percent in 1995-96 to 37 percent in 2007-8.

As reported by the National Association of Student Financial Aid Administrators, many colleges and universities have increased merit financial aid to help attract high achievers in order to maintain or improve academic quality and competitiveness. Other institutions have awarded academic merit scholarships to help keep academically qualified students in a particular state for college.

But the shift in merit and need-based aid has unfortunately had the effect of significantly reducing opportunities for low-income students to attend college. "From 1995-96 to 2007-08, the proportion of merit aid recipients in the highest quartile of family income rose from 23 percent to 28 percent," noted Inside Higher Ed, "while the proportion of merit aid beneficiaries from the lowest economic quartile fell to 20 percent from 23 percent."

Education Week added that a report released this summer by the Education Trust underscored the problem: It found that private, nonprofit institutions spent nearly twice as much on students in the top quintile of family income as they did on those in the bottom quintile.

NASFAA agreed that the trend is a concerning one. "With enrollment and tuition rates climbing, the demand for financial aid has increased," the organization pointed out on its Web site, "particularly as many states make cuts to their need-based grant programs."