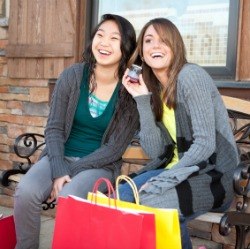 Millennials, or Generation Yers (those born between 1982 and 1999) are more money oriented and materialistic than Baby Boomers were at the same age, but less interested in working, a new study published this week in the Personality and Social Psychology Bulletin showed. Indeed, researchers found that materialism began growing throughout the mid-70s, hit a high in the late 1980s, and has stayed there ever since, reports The Huffington Post. Perhaps it's no surprise that both parents and advertising are thought to be part of the problem.

"You're taught what's important and how to act by your parents, the media and those around you," Jean Twenge, a co-author of the study and professor of psychology at San Diego State University, told Life Inc. "It's the cultural changes that are really bringing these changes."

The researchers culled their information from "Monitoring the Future" behavior surveys, an ongoing study that looks at the attitudes, behaviors and values of high school and college students as well as young adults. Specifically, researchers for this study used data that came from than 355,000 U.S. high school students over the years 1976 to 2007, according to Life Inc.

Twenge and co-author Tim Kasser, a psychology professor at Knox College, found that 62 percent of students surveyed from 2005 to 2007 said they wanted to have a lot of money compared with 48 percent from 1976 to 1978. At the same time, 39 percent of high school seniors in the mid-2000s said they didn't want to work hard, Life Inc. reported. This compares to 30 percent in the late-1980s and 25 percent in the mid-1970s who said that hard work did not appeal to them.

"Compared to previous generations, recent high school graduates are more likely to want lots of money and nice things, but less likely to say they're willing to work hard to earn them," Twenge told The Huffington Post.

As well, 60 percent of teenagers that they anticipate they would earn more than their parents did -- true for only 49 percent of teenagers in the 1970s, according to The Huffington Post. These findings among Millennials suggest that "entitlement -- the idea that one deserves things without working for them -- may have increased," researchers wrote.

Yet, the study only looks at students up to 2007 and does not include any from the past five years, a time period during which the country has been in through the Great Recession. Such hard economic times might suggest the development of teenagers who are less materialistic and have an appreciation for work. The researchers do not predict this will be the case.

"Numerous social observers suggested that children (growing up in the current economic downturn) might reject materialistic values and return to frugality and thrift," they note in the study, as partially quoted in Pacific-Standard magazine. "The current data argue against such predictions, given that the dislocation and insecurity wrought by high levels of unemployment and other economic woes are associated with higher levels of youth materialism later in life."