Study Finds That One Third Of College Students Transfer Schools 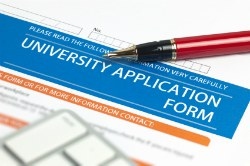 A report released yesterday has found that one-third of all students transfer to different colleges at least once before graduating.

The report, "Transfer and Mobility: A National View of Pre-Degree Student Movement in Postsecondary Institutions," was released by the National Student Clearinghouse Research Center, and published in partnership with Indiana University's Project Academic Success. Its data was based on nearly 2.8 million full- and part-time students of all ages enrolled in a wide variety of institutions between 2006-2011.

The data is particularly significant because currently, graduation rates reported to the federal government only include traditional, full-time students who remain at one institution.

"Our findings indicate that more sophisticated ways of measuring student transfer behaviors and institutional effectiveness are needed," noted Dr. Don Hossler, executive director of the research center, in a press release. "Institutions and policymakers should focus on strategies that can facilitate success as students make choices about different postsecondary paths. Similarly, states must be able to distinguish between true non-persisters and out-of-system or out-of-state transfers."

Clifford Adelman, a senior associate with the Institute for Higher Education Policy, pointed out in Inside Higher Ed that the federal government's policy can penalize colleges whose students are more likely to transfer. As an example, he cited the case of a young woman who developed an interest in marine biology at Oklahoma State University and later transferred to the University of Rhode Island. She graduated with honors, and Adelman noted that both colleges should be credited.

"We punish Oklahoma State for helping her find what she really wanted to do," he told Inside Higher Ed. "And as far as Rhode Island's [graduation rate is] concerned, she's a non-person."

Janet Marling, executive director of the University of North Texas's National Institute for the Study of Transfer Students, welcomed the new data.

"To have any kind of accurate national picture that describes transfer has just been nonexistent," she told Inside Higher Ed. "It used to be just an institutional issue. Now it's an educational issue with folks moving between institutions."

"A Third of Students Transfer Before Graduating, and Many Head Toward Community Colleges," chronicle.com, February 28, 2012, Jennifer Gonzalez