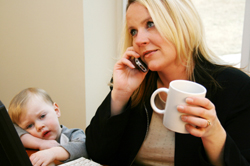 Working from home is supposed to make things easier, giving employees the flexibility to keep up with work demands while still maintaining responsibilities at home. However, a recent study shows that staying connected has different effects on women and men, even when they are under the same amount of work pressure.

According to CNN Health, the study, lead by Paul Glavin, a doctoral candidate in sociology at the University of Toronto, analyzed responses from 1,042 workers. Participants, who were mostly white, married with children and in their 40s, were asked how often they were contacted at home by their job and if that affected their family responsibilities. Researchers found that, although women and men were equally capable of managing their work and family lives, women felt guilty twice as often as men when contacted frequently outside of the office. Researchers believed that this guilt caused women to feel more distressed than men.

"For women levels of guilt and distress seem to be correlated quite strongly with the frequency of contact," explained Scott Schieman, a co-author of the study and a professor at the University of Toronto, in an interview with Reuters. "Women experience, on average, a rise in guilt and distress as you increase levels of this contact."

Interestingly, Schieman added that these findings were consistent, regardless of a woman's age, marital or parental status or socioeconomic level.

Researchers did not analyze why women felt guilty, but speculated that women who let work interrupt family time may feel that they fall short of the ideal.

"More women of my generation had stay-at-home moms," said Psychologist Leslie Connor, 54, to CNN Money. "Your role model met you at the bus stop, had dinner on the table. It adds to the guilt if you think, I'm not doing for my children what my mother did for me."

Schieman agreed. In a press release, he noted, "While women have increasingly taken on a central role as economic providers in today's dual-earner households, strong cultural norms may still shape ideas about family responsibility. These forces may lead some women to question or negatively evaluate their family role performance when they're trying to navigate work issues at home."

As reported by CNN Health, Connor recommended that men and women set boundaries between work and home to create a realistic balance. One tip she had was to leave the BlackBerry in another room when playing with children to limit interruptions and fully engage in activities.

While previous work-family research has focused on how parents manage resources and responsibilities for work and home, The Washington Post noted that this report is the first to study the emotional aspects of the process.