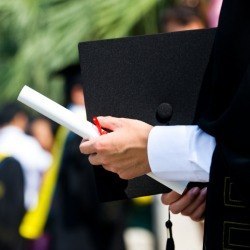 "The jump in graduate school borrowing is bigger than I thought it was going to be," author of the report Jason Delisle, director of the Federal Education Budget Project, told CNN. "Are graduate students thinking: I've got less money to get a graduate education, so I should borrow more? My employment prospects look worse, so should I borrow more? That's problematic."

According to CNN, the report shows that median graduate student loan debt rose 43 percent from 2004 to 2012, from $40,200 to $57,600. Certain degrees fared worse in terms of average expense. For example, students who earned a Master of Business degree in 2012 took out an average of $42,000 in student loans in 2012, which is only slightly more than the average for all graduate student loans in 2004. On the other hand, students who graduated with a Master of Arts degree in 2012 took out an average of $58,500.

Graduate degrees in fields known for high-paying positions led students into even more indebtedness, noted Slate.com. Law students, for example, borrowed $128,125 in 2012 compared to only $76,816 in 2004. A similar pattern was also revealed for graduate degrees in medicine and other health sciences, though not quite to the same degree. According to the study, graduate students in medicine and other health sciences took out an average of $103,033 in student loans in 2004, compared to a whopping $135,000 in 2012.

"Confusing undergraduate with graduate debt in discussions of college costs and student loans is problematic because the two categories of credentials are really quite different and warrant different types and levels of public support," they wrote, adding that "students, families, and taxpayers invest significant resources in financing "college," in large part because a bachelor's or associate degree is a must for anyone who wants to secure a middle-class income."

On the other hand, as the authors of the study argue, graduate and professional degrees do not provide the same foundation for economic opportunity as traditional four-year degrees do. Therefore, student loans taken out by those pursuing graduate and professional degrees should be considered a separate issue from the high costs of college and student loan debt for typical four-year degrees.