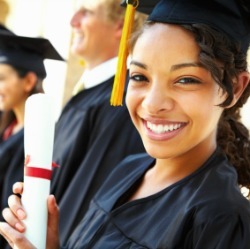 As the nation's latest crop of college graduates makes its way into the workforce, some could find significantly better salaries and employment opportunities than others. What dictates the difference in career options? A new study says it's all about the majors.

A report from Georgetown University's Center on Education and the Workforce suggests that while going to college still pays off in terms of employment and earnings, not all majors are created equal. Science, Technology, Engineering and Mathematics (STEM) majors tend to garner better opportunities and earnings compared to those with non-technical degrees. Recent engineering graduates earned a median salary of $54,000 in 2010, for instance, compared to $29,000 for art majors and $30,000 for social work and psychology majors. Individuals with diplomas in STEM also tend to have lower unemployment rates.

"What your field of study is ends up being the most important thing," Anthony Carnevale, director of the CEW and co-author of the report, told Today. He said students should choose majors that teach practical skills, like those within health care. One caveat exists, however: students must enjoy the majors they select. "If they're not interested or suited (to) the major that they choose -- and ultimately, even more so, the job that they choose -- they won't be any good at it," he said.

The report suggests it is also important to look at the whole employment picture before choosing -- or shunning -- a particular field. For example, recent information systems graduates face a 14.7 percent unemployment rate, driving the overall unemployment rate for mathematics and computer graduates up to 9.1 percent. This number can be misleading since several fields within information systems have a strong demand for qualified workers.

As for students who want to major in lower-demand fields like English literature or archaeology, Carnevale said they must be prepared to seek additional skills, either on their own or with employers willing to train them for more specific careers. Many of these individuals end up earning more skills-oriented graduate degrees, like law or business. "It's a tougher game," Carnevale told Today.

According to Diverse Issues in Higher Education, the study comes at a time when Congress is considering legislation that would require colleges to report graduates' earnings. Carnevale told the publication that such legislation is inevitable, and will likely be passed very soon. "The minute education became an investment and more and more of us spend more to get it, there needs to be transparency about its value in terms of whether you'll get a job and what it will pay," he said.

The Georgetown report is among several studies examining the employment and financial benefits of a college education, Today added. For example, the U.S. Census Bureau data showed that college degree holders earned nearly twice as much in 2011 as those with only a high school diploma. The Pew Charitable Trusts released a report earlier this year that suggested college educated workers fared much better in the recent recession and recovery than did their less educated peers.