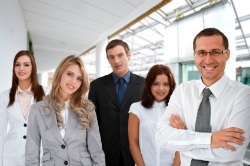 The job market has been harsh to young workers, particularly new grads. But a recent study shows that certain characteristics may help young workers better weather the storm.

As Fortune reported, a team of researchers from the University of Minnesota, Purdue University and the University of Pennsylvania tracked a group of ninth-graders from Minnesota from 1988 to 2009. According to HealthDay, participants--who are now 37 to 38 years old--were surveyed each year to determine what influenced employment success during the transition to adulthood.

Researchers found that there were three key ingredients to helping young adults keep their jobs during the economic downturn: educational aspirations, realistic and focused career goals and job search activities.

"Although structural factors like industry, region, etc... are undoubtedly important, these three characteristics are found to be particularly significant career transition resources," said Mike Vuolo, professor at Purdue University, in a press release.

According to Fortune, researchers examined data collected during the time of the recession--2007 to 2009. The study revealed that those who had high career aspirations and clear career goals from ages 18 to 30 were more likely to be employed and have a higher salary in 2009, noted the press release. Conversely, young people who were more indecisive in their career goals were less likely to succeed during the Great Recession. Even when researchers took educational attainment into account, these trends still occurred.

Fortune pointed out successful students were realistic in their expectations. Jeylan Mortimer, a co-author of the study and professor of sociology at the University of Minnesota noted that successful students were able to adjust their career goals and went to vocation school or earned an associate's degree rather than attend a four-year university for a bachelor's degree. This seemed to help students take control of their careers and maintain clear goals.

While HealthDay noted that the study was not subject to the same type of scrutiny as research published in peer-reviewed medical journals, Fortune noted that the findings are still informative.

According to the press release, the study was presented at the American Sociological Association's national conference in Las Vegas, NV.