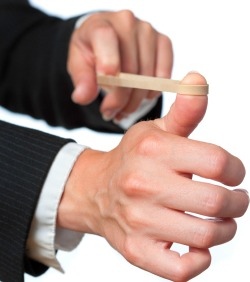 Bullying among young children and teenagers -- a national discussion of late -- has spilled over from the schoolyard into the office. A new study suggests that workplace bullying is a common phenomenon that has serious effects on adults experiencing or even witnessing it. In fact, the study found that being the target or observer of workplace bullying significantly increases a person's likelihood of self-medicating with antidepressants, sleeping pills and sedatives.

The study, which was published in the BMJ Open Journal in December of this year, surveyed 6,000 Finnish public service workers. Results showed that one in five women and one in eight men reported being bullied at work, according to ABC News. Furthermore, 5 percent of participants reported that they were currently being bullied, while 50 percent said they had witnessed workplace bullying at least occasionally, reported CBS News. 10 percent of those surveyed said they saw bullying occur quite often in their work environment.

"We've all seen it go on," Dr. Nadine Kaslow, vice chair of psychiatry at Emory University in Atlanta, told ABC News. "It's that bystander effect; nobody wants to do anything about it."

While the presence of bullying in the professional world has been discussed before, this BMJ study concretely links workplace bullying to the use of antidepressants and anti-anxiety medications. Using a national registry database, researchers looked at participants' use of prescribed psychoactive medications, such as antidepressants, sleeping pills and tranquilizers, for several years after the initial survey. This analysis showed that women who experienced bullying were about 50 percent more likely to have a prescription for psychoactive drugs, while bullied men were 200 percent more likely, reported FOX News.

Other studies have shown that in-office bullying can lead to absenteeism, anxiety, depression and stress. This study adds to the growing body of evidence about the negative impacts of bullying in the office. Considering the Workplace Bullying Institute's finding that 35 percent of employees in the U.S. report being bullied, according FOX News, this study of Finnish workers calls attention to the need for management, not only in Finland, but also in the United States, to address bullying in the professional world.

"Supervisor training and increasing the abilities of management to better help the targets and control and prevent bullying could promote employee health and prevent adverse effects of workplace bullying," said Dr. Tea Lallukka, an author of the study and a researcher at the University of Helsinki.

Employees who have experienced or witnessed bullying can also take steps to reduce their likelihood of experiencing extended mental health problems that can result from experiencing or witnessing bullying.

"There are employee assistance programs and wellness programs available to people," Kaslow told ABC News. "I would encourage people to take advantage of those. Get support -- social support, self care, exercise, eat well -- whatever it is, make connections with people at work."