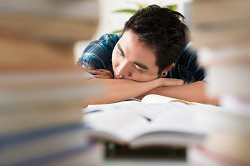 Many college students would probably admit to needing a little more sleep, but research released last month at the annual meeting of the Associated Professional Sleep Societies emphasized just how critical it is to academic performance. In fact, according to the study, poor sleep is just as bad for students' GPAs as excessive alcohol or marijuana consumption. Part of the problem, they said, is that colleges rarely invest time and money into programs designed to improve students' sleep. But if recent headlines are any indication, this might be changing.

Researchers J. Roxanne Prichard and Monica Hartman reviewed survey information from nearly 73,000 students who participated in the American College Health Association's Spring, 2009 National College Health Assessment. Focusing primarily on college freshman, the pair looked for correlations between sleep patterns and grades. Their findings were clear: Students who experience more sleep issues, like early awakenings or insomnia, tend to earn lower grades than those who do not, and not in a minor way. The impact, they noted, is akin to that of binge drinking or frequent marijuana use.

"The cultural assumption is that college is a time of bad sleep, and that all-nighters fueled by energy drinks and cheap pizza are just an inherent part of what it means to be a student," Prichard and Hartmann told Family Practice News, but "well-rested students perform better academically and are healthier physically and psychologically."

Just as some employers have begun encouraging napping at work to increase productivity, campuses across the nation are taking their own steps to combat student exhaustion. The Huffington Post reports the University of Colorado-Boulder and University of Michigan have both established permanent nap rooms on campus designed to let students snooze comfortably between classes. Art Center College of Design in California recently followed in their footsteps with its own Nap Room, as did James Madison University, which boasts what it calls "the first designated student napping center in a university setting," notes In The Capital.

Not all efforts to improve student sleep come from administrators, however. JMU's Nap Nook was the brainchild of senior psychology major Caroline Cooke, who wanted to find a way to boost students' energy. And according to The Huffington Post, Harvard University student Yuqi Hou started a petition in 2013 to launch a nap room on campus, but the Ivy League school has yet to follow through. Meanwhile, students at the University of Texas-Austin and the University of California-Davis have taken matters into their own hands and created "nap maps," which reveal the best places to catch a quick snooze on campus.

As for schools that do invest in student wellness, nap rooms are often just the tip of the iceberg: Spokesperson Teri Bond told The Huffington Post that The Art Center offers several other key "stress-busting" services, like dog therapy, chair massages and yoga.

"The campus community is deeply committed to helping students succeed," said Bond. "(These) are just a few examples of how we try to help students be well and thrive."