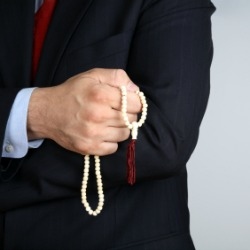 According to a new study conducted by Dr. Roxanne Gervais of the Health and Safety Lab in Stockport, the United Kingdom, religious employees may be happier and more fulfilled than their non-religious counterparts. The study, which analyzed 34 full-time workers in the Caribbean, reached that conclusion after carefully examining participant's feelings on a variety of factors including their preceived level of job satisfaction, well-being, and religiosity.

In addition to being happier, religious employees were less likely to experience depression, anxiety, or fatigue, according to Headlines & Global News. And, in striking contrast to non-religious workers, religious employees noted that they felt as if their lives had meaning. Study participants also claimed that regular church attendance helped to boost their self-worth.

These conclusions have led researchers to believe that accommodating religion in the workplace may not be a bad idea. After all, employers with a happy and healthy workforce have as much to gain as their employees.

"Religiosity in the workplace may act as a resource, making people more resilient to cope with the many challenges of working life. Such personal beliefs could be very helpful not only for employees, but also for employers," Dr. Gervais pointed out in a press release.

"We should hence encourage employers to accommodate, where possible, employees' religious beliefs while at work, and not shy away from the issue," she said to the Telegraph.

But, why are religious employees so much happier in the first place? According to recent research, religiosity forms a "buffer against the strains" of modern life. Basically, the more religious an employee is, the less they tend to worry about factors that they may feel are out of their control. Religious employees may be looking for ways to add more meaning to their lives in the first place as well, says Dr. Gervais.

"As the pace of work and life accelerates, people long for meaning, and the younger generation in particular is looking for more than just a big pay cheque at the end of the month," she said.

Since previous studies have also shown a positive correlation between religion and employee satisfaction, researchers believe that their study may be of interest to employers as they craft their own workplace policies. This particular study will be presented at the British Psychological Society's Annual Conference in Brighton.