Study Reveals Impact of "Strategic Flirting" in the Workplace 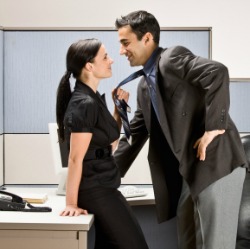 Women who flirt at work for strategic reasons may want to look for other ways to get ahead, a workplace study shows. According to the study, which was conducted by Oklahoma State University management professor Alexis Smith and researchers from the University of Utah, the University of North Carolina-Chapel Hill, and the University of Massachusetts-Amherst, flirting at work can be detrimental to those who engage in the behavior. The study, which will be presented at the next Academy of Management conference in Orlando, surveyed 281 female lawyers from 38 law firms in order to assess the impact of what academics are referring to as "strategic flirting," according to ABA Journal.

Survey participants were asked to reveal their level of "strategic flirtation" by describing how often they flirted with co-workers of the opposite sex. Participants reportedly formed their response by agreeing or disagreeing to statements such as "I smile flirtatiously at certain men at work" or "I sometimes try to play dumb or act like I need help from a male at work."

Survey respondents were also asked to describe the culture of their firm as "masculine" or "feminine." According to research standards, the law firms were judged to be masculine if they were seen as aggressive, ambitious, or competitive while workplaces that were empathetic, sensitive, and warm were seen as feminine.

Researchers used the data to conclude that workplace flirting was more common in law firms pegged as "masculine." And although they thought that habitual workplace flirts would be treated about the same in both environments, the study revealed that the masculine workplaces prone to encouraging the behavior were the very ones who tolerated it the least.

"What comes as something of a surprise is that an environment like that leaves women who do flirt exposed to a lot of hurtful slights, like being treated rudely or as if they were stupid or being excluded from meetings," author Alexis Smith told Business News Daily. "Permitting that to happen in a setting that encourages the behavior in the first place is hardly very cavalier."

Surprisingly, the study concluded that flirting in "feminine" workplaces was often overlooked. "In organizations characterized by compassion, understanding and sympathy, women who engage in strategic flirtation report experiencing less everyday mistreatment than women in less feminine organizations," the authors of the study wrote.

Regardless, workers who flirt with the goal of getting ahead might be in for a rude awakening, no matter where they work. And, employees shouldn't have to flirt to advance their agenda or succeed in their career to begin with. In fact, they may be taken more seriously if they can manage to refrain from flirting altogether.

"Don't do it with the idea of getting ahead," co-author Arthur Brief, a professor of business ethics at the University of Utah, said in an interview with Quartz. "Most of the data suggests it's going to backfire."

"Flirting at Work Is a Catch 22 For Women," businessnewsdaily.com, August 6, 2013, Chad Brooks