Study Reveals ISU Students Are Not Aware Of Their Debt 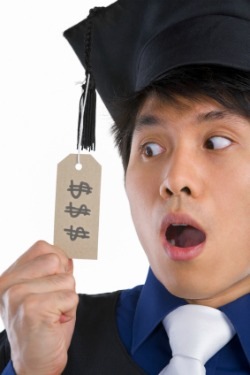 A recently-released study conducted by the school's Department of Human Development and Family Studies along with two other groups shows that one in eight students at the school are not aware they have student loan debt, according to a press release issued by Iowa State University. Additionally, two in five aren't clear about how much they owe and some 10 percent underestimated their outstanding balance by more than $10,000, reported the Des Moines Register.

"Finding out there was a significant number of students who did not know that they owed any money ... that surprised me a bit," Cynthia Needles Fletcher, a professor in the school's Department of Human Development and Family Studies, said in the Ames Tribune. "On the other hand ... students have lots of demands on their time. They are focused on today and not so much on this idea of taking on debt."

The study was made up of some 800 ISU undergraduate students who volunteered to participate; Fletcher described that as a small sample size given that the school had 24,300-plus undergraduates enrolled last year. However, she said the study is ongoing and looks to see how students' knowledge about their loans will affect their ability to graduate.

One immediate impact of the study is that school officials plan to send e-mails to students this summer showing how much they owe on their student loans, Roberta Johnson, ISU director of financial aid, explained in the Des Moines Register. The e-mail will also include their estimated monthly student loan debt payments following graduation.

"There may be overly involved parents that are just taking care of the student's financial aid or, there's always a contingent of students who I think use an 'ostrich in the sand' kind of approach and say, 'If I don't pay attention to it, I can pretend it doesn't exist,'" Johnson said in the Ames Tribune.

The study also showed that the students who were most knowledgeable about the amount of student loan money they owed had higher GPAs or had been taught financial literacy from their parents.

Fletcher said that messages about financing postsecondary education starting "as early as fifth grade," can have an impact. In fact, targeting students early may be the all important component: starting this year, high schools in the state will include financial literacy as part of their curriculum, according to the ISU press release.

The study comes at a time when the school, through its ISU leaders and Government of the Student Body, has made a concerted effort on campus to improve financial literacy. A peer-to-peer program called CyGold has been launched to help freshmen and sophomore students learn about issues such as budgets and loans. Additionally, student enrollment has jumped in a one-credit course called "Personal Finance in Early Adulthood."

"Our goal is to use the information to target and improve our education and counseling programs, and to see how this information can also inform the body of research surrounding college students and their financial capability," Fletcher said in the press release.