Study Reveals Surprising Data on the Value of College Degrees 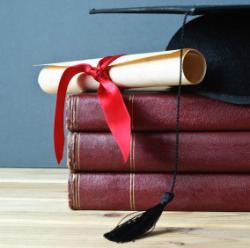 With average student loan debt currently standing at around $26,000 per student, many soon-to-be college students are weighing their options before they sign up for school. And according to a new study conducted by College Measures, individuals are smart to be concerned about the value of their future college degree. The new study, which was created through a collaborative effort by the American Institutes for Research and Matrix Knowledge Group, surveyed students from Arkansas, Colorado, Tennessee, Teas, and Virginia, to uncover data that challenges many of the preconceived notions we have about the value of a variety of two-year and four-year college degrees. And unfortunately, the findings weren't pretty for everyone who has invested heavily in their college education.

For instance, survey results proved that attending an elite institution doesn't necessarily guarantee higher earnings, according to the Hechinger Report. "The findings challenge some conventional wisdom, showing, for example, that what you study matters more than where you study," said Mark Schneider of the American Institutes for Research. The study also revealed that those with two-year degrees and technical certificates may be earning more than previously thought. Although statistics varied by region, the study showed that in Texas, for instance, graduates with a technical or associate's degree earned over $11,000 more than those with a bachelor's degree during their first year after graduation.

The study also showed that not all careers in the STEM fields (science, technology, engineering, and math) were equal. According to Digital Journal, those with science degrees in subjects such as biology or chemistry earned no more than graduates with a degree in English or literature. Graduates with degrees in technology, engineering and math, however, were paid handsomely for their in-demand skills. Not surprisingly, the study showed that graduates with degrees in music, photography, philosophy, and other liberal arts fields were paid the least.

College Measures hopes that making this type of information available to students will help to steer them into degree programs that provide a sound investment. "Higher education is one of the most important investments people make," said Schneider. "The right choices can lead to good careers and good wages while the wrong ones can leave graduates with mountains of debt and poor prospects for ever paying off student loans."

Schneider believes that the study findings could also be used to help colleges and universities refocus on providing high value college degrees. "What we've done with these five states, every state should be doing," Schneider said. If each state participated in the study, or created their own, they could potentially uncover data that could be used to properly prepare students for their respective job markets. According to Pew Charitable Trusts, the new study indicates that it may be time for colleges and universities to rethink their funding strategies. For instance, Schneider thinks that states should consider increasing funding for community colleges which "can represent a good way for residents of a state to get the training that they need to get into the local labor market and earn a reasonable wage."

"What You Study in College Is More Important than Where You Go To School When It Comes to Your Pay, New Analysis Finds," digitaljournal.com, September 3 2013