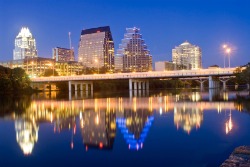 With migration in the US slowing to its lowest rate in recorded history, a recent study of census data has revealed that college graduates are increasingly living in major metropolitan areas in the south and southwest.

According to The New York Times, Austin became the most attractive destination for young Americans from 2007 and 2009, according to an analysis by William H. Frey, a senior demographer at the Brookings Institution. The Texas college town replaced Riverside, which was the top destination during the middle of the decade, as the most popular place to live for college graduates.

During the recession, migration rates decreased substantially. An analysis of migration patterns among American young adults ages 25 to 34--the nation's most mobile population--showed that the top cities were those that flourished economically, like Dallas, and those that were considered popular destinations, like Austin and Seattle.

In the middle of the decade, before the recession and at the height of the housing boom, the top five places to live were Riverside, Phoenix, Atlanta, Houston and Charlotte. Austin ranked ninth during that time and Las Vegas was tenth.

"In 2005-2007, college-educated adults, like other segments of the population, were strongly attracted to 'bubble' metro areas like Riverside, Phoenix and Las Vegas where easy credit and affordable housing were available," William H. Frey wrote in his analysis, as cited in The Atlantic. After the housing bubble burst, college graduates have gravitated towards more "knowledge economy" metros, like Austin, Raleigh, Charlotte and Seattle, Frey said.

Some shifts, however, in the migration patterns of college graduates are difficult to explain, The Wall Street Journal noted. The growth in certain areas could reflect college-educated workers who are stuck in a geographic region, instead of being lured elsewhere by better job opportunities. In some cases, growth can be seen in a region when fewer people are leaving than in the past--which could occur if workers are tied down because of mortgages or unable to relocate for other reasons.

On the other hand, a city with a major university, such as Austin, is likely to have attracted individuals to the area, in addition to retaining graduates who failed to find work elsewhere.