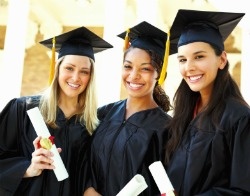 A new study has found that women are more likely to complete college than men, and affluent students are far more likely to earn degrees than those with low incomes.

The study from the National Bureau of Economic Research, "Gains and Gaps: Changing Inequality in U.S. College Entry and Completion," used data from the U.S. Census and the National Longitudinal Surveys of Youth, and was authored by Martha J. Bailey and Susan M. Dynarski, both from the University of Michigan. It found that women outpace men in college completion in every demographic group, with the largest gap--13 percentage points--among those who earn the most income.

"It was surprising to us to find the female advantage is the largest among the highest quartile," noted Dynarski, who was interviewed by Inside Higher Ed. "When you hear about 'the boy problem,' you tend to hear about low-income groups."

The paper used data from those born from 1961-1964 and those born from 1979-1982, and found that income level significantly impacts college attainment and completion: In the 1979-1982 cohort, about 30 percent of those who earned $25,000 or less entered college, compared to 80 percent of the top quartile--those who earned at least $85,000. Moreover, the lowest income group was found to graduate college at a rate of nine percent, and the highest income group graduated at 54 percent.

Tim Smeeding, director for the Institute for Research on Poverty at the University of Wisconsin-Madison, explained that one reason for the disparity is that poor students often attend lower-tier schools, which have bigger classes and offer less guidance.

"We've got a problem in that we get low-income kids to college, but they don't persist to graduation," he told CNN Money. "It's harder for them to find their way through. They get discouraged and they drop out."

Failing to complete college can have a lasting effect on low-income students. According to research from the Pew Economic Mobility Project, 41 percent of students from families with the lowest incomes advance to the highest two rungs if they earn a college degree. Only 14 percent of those who don't earn degrees move up that far.

"The chance for upward mobility from the bottom without a college degree is extremely limited," noted Eric Currier, project manager at Pew, who was quoted by CNN Money. "There is a significant wage premium for having a college degree."