Study Says Hiring Veterans Can Be Good For Businesses 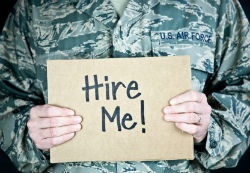 A new study has found that veterans can be valuable employees, but many business leaders view hiring veterans as risky.

The study was released this week by the Center for a New American Security, a non-partisan group that studies defense policies. As reported by USA Today, the study was based on interviews with 87 business leaders representing 69 companies.

Currently, the unemployment rate for veterans is 12.7 percent, which is slightly higher than a year ago. Among 18- to 24-year-old veterans, nearly one in four were unemployed in May -- higher than the regular civilian population.

The study found that many employers are eager to hire veterans because those who served in the military are perceived to have good leadership skills, character and discipline. But some businesses are reluctant to consider veterans because of a fear of mental health problems, or the possibility of future deployment.

In fact, the majority of employers polled cited a number of reasons for not hiring veterans, including "skill translation" -- when employers who are not familiar with the military are not sure how a veteran's experience can be utilized as workplace skills. In addition, over half of employers cited concerns that veterans may encounter a "negative stereotype" such as the belief that they suffer from post-traumatic stress disorder.

Perceptions of veterans varied, depending on the company surveyed. "If you look at a company that emphasizes compliance of process, or has issues of physical safety in their workplace, they love veterans because veterans follow step-by-step procedures very precisely," noted Margaret Harrell, one of the report's authors, who was quoted by Army Times. "The flip side of that is the perception that veterans are too rigid and might lack creativity."

For example, Forbes pointed out that Prudential is one example of a company dedicated to assisting veterans. Stephen Robinson, the company's vice president of external veteran affairs, told Forbes that "in supporting veterans we help ourselves. We get people who are talented, motivated, dedicated, and this helps us improve how we do business and solve problems."

Business leaders polled in the study also noted that veterans tend to be loyal to their employers. "Veterans are committed to the organizations they work for, which can translate into longer tenure," the report said.

The study recommended that the Pentagon and Labor Department help new veterans explain the skills acquired in the military. For example, such skills may include planning and executing tasks under pressure and being safety-minded.

"Why Smart Businesses Understand That Veterans Are Outstanding Employees," forbes.com, May 23, 2012, Ryan Scott