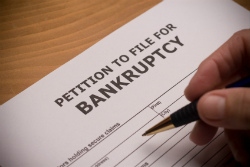 A new report released this week has uncovered a disturbing trend: The number of college-educated people who are filing for bankruptcy is increasing.

The study, conducted by the nonprofit Institute for Financial Literacy, found that the percentage of debtors with a bachelor's degree rose from 11.2 percent in 2006 to 13.6 percent in 2010. Those who did not hold any degree made up the largest portion of those who filed for bankruptcy--70 percent. But interestingly, the percentage of debtors with just a high school diploma or who did not complete college dropped.

"The Great Recession has had a dramatic impact on the bankruptcy filings of American consumers across the economic spectrum--including college-educated, high-income earners," noted Leslie Linfield, executive director and founder of the Institute for Financial Literacy, who was quoted by CNN Money. "While less educated, low-income individuals continue to represent the typical bankruptcy filer, this report underscores a sophisticated evolution of the profile of the American debtor that now extends to disparate age, income and ethnic groups."

The study found that the number of debtors with graduate degrees has also risen: In 2006, just 4.9 percent of people who filed for bankruptcy held graduate degrees, but that number jumped to 6.73 percent in 2010.

"We're told that if you do go and get advanced education, you're going to be almost guaranteed this economic success," said Linfield, who was quoted by The Washington Post. Nevertheless, she said, the recession showed that "higher education was no guarantee that you weren't going to be a risk."

When asked about the reasons for filing bankruptcy from 2006 to 2010, an increased number of respondents said they had overextended on their credit, lost their jobs, or had seen a reduction in income.

Linfield also expressed concern about the age of debtors. The study found that in the past five years, the number of people 55 and older filing for bankruptcy jumped 25 percent.

"At 54, do they really have enough time in front of them to start over?" said Linfield, who was quoted by the New York Daily News. "They are at risk."

As reported in the Washington Post, the study was based on a survey of more than 50,000 consumers who participated in credit counseling or financial education courses, which is required for those seeking bankruptcy protection.

"Number of College Grads Who End Up Filing for Bankruptcy Jumps 20% Over Past Five Years: Report," nydailynews.com, September 14, 2011, Elizabeth Lazarowitz