Study Shows A Messy Desk May Actually Be A Good Thing 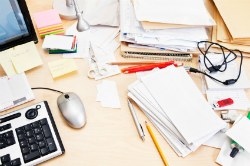 Are bosses or colleagues raising a stink about your cluttered cubicle? Good news! Science may have vindicated your sloppy ways.

Life Inc. reported that researchers in the Netherlands conducted a number of experiments that suggest working in a messy environment may actually encourage workers to simplify tasks, promoting clear thinking.

"Opposite to conventional wisdom, we have found that participants working at a messy desk displayed simpler cognitions," Researcher Jai Liu from the University of Groningen told Life Inc. "This is because messiness induces a need for simplicity."

Furthermore, reported Mail Online, many famous thinkers and writers were known for their cluttered work environments, including the likes of Albert Einstein. The study, to be published in the Journal of Consumer Research, suggests this might not be a coincidence.

"Messy desks may not be as detrimental as they appear to be, as the problem-solving approaches they seem to cause can boost work efficiency or enhance employees' creativity in problem solving," noted the authors.

According to Live Science, Lieu and her fellow researchers ran a series of experiments that evaluated how more than 300 test subjects respond to clutter. In most cases, those surrounded by chaos tend to categorize with a mind for simplicity and buy products that promote organization. Life Inc. also noted that these benefits extend beyond cubicle walls, as the messy-desk effect can actually impact those sitting nearby, inspiring a need for simplicity.

Interestingly, the study's findings also suggest that there is a link between one's messiness and his or her political stance. As reported by Live Science, those who lean to the left are less put off by messes, so have a muted response to it.

"Specifically, conservatives, when confronted with a messy environment -- compared to a clean environment -- were willing to pay more for a T-shirt with a simple-looking picture," the researchers wrote. "Liberals' willingness to pay for this shirt was not affected by messiness."

But while the study shows that clutter can actually benefit workers, Life Inc. noted that the researchers stopped short of giving the green light to dismantle your office.

"We'd be careful with making recommendations," said Lieu in Live Science. "One reason is that simplification is not always desirable. In addition, we suspect that extreme mess certainly impairs efficiency."