Study Shows Baldness Can Be Beneficial in the Workplace 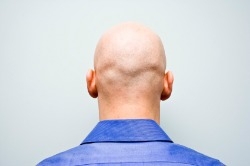 Bald men may lack a full head of hair, but this paucity could work to their advantage in the workplace. A new study, released in the journal of Social Psychological and Personality Science, showed that bald men are perceived as more dominant, masculine and powerful than men who have a full head of hair.

Researcher Dr. Albert Mannes from the Wharton School of Business at the University of Pennsylvania undertook the research. He noticed that he was being treated differently following his own mid-30s hair loss and the subsequent decision to go bald, reported Life Inc.

It's not clear to Mannes why this is so, but he postulated that bare heads are linked with masculine images such as those of professional athletes, military men and Hollywood-action stars like Bruce Willis.

"It's associated with traditionally masculine professions such as the military or sports, but there is also a certain level of confidence you have to have to willingly dispense with your hair. It violates societal norms" he explained in TheSpec.

The appearance of dominance may be the reason why some business executives, such as Amazon's Jeff Bezos, 48, and Netscape founder Marc Andreessen, 41, go for the look, pointed out The Wall Street Journal. Seth Godin, 52, chief executive of the website Squidoo, also sports a bare head. He's had this look for the past 20 years.

"I'm not saying that shaving your head makes you successful, but it starts the conversation that you've done something active," Godin said in The Wall Street Journal. "These are people who decide to own what they have, as opposed to trying to pretend to be something else."

The study also showed that people perceived men with thinning hair as the least attractive and the least dominant of all. This may be because male-pattern baldness is associated with characters such as Seinfeld's George Costanza. A liberating step could be as easy as shaving the head.

"If you are visibly balding, shaving could make you feel better about it and give you more confidence," Mannes said in TheSpec.