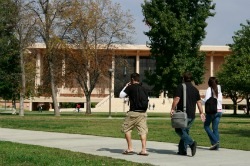 California, once a leader in higher education, is losing its footing and "trending downward".

According to the Los Angeles Times, a new report from the Institute for Higher Education Leadership & Policy (IHELP) at Sacramento State showed that California's higher education system has lost its status as leader and is continuing to move down the ranks.

"The outcomes documented in this report are not ones to celebrate," said Nancy Shulock, director of IHELP, in a press release.

The report examined national data to evaluate the state's performance on six different categories: preparation, participation, affordability, completion, benefits and finance. Data show that the state is above the national average only in participation, but the report pointed out that recent budget cuts and enrollment pressures were not taken into account, which means that participation rates may actually be lower. Furthermore, despite high participation, California performed poorly in terms of degrees awarded in relation to the number of enrolled students.

The report also compared California to other states and found mix results. In measures of affordability, California performs better but only when it comes to tuition and fees as tuition is still comparatively low and many low-income families are able to cover tuition costs with Cal Grants. However, when cost of living is factored in, performance drops. In finance, California is slightly above the median in state and local tax revenue allocated for higher education, but is 50th when it comes to total funding per student.

Data also showed that each subsequent generation is less educated than the previous generation, bringing the state's performance down in terms of benefits associated with educational attainment. The only improvement in the last seven years, noted the press release, has been in college-preparation for high school students, but the state still lags behind most others in this category. Overall, the report stated that California cannot compete nationally as well as internationally in producing an educated population.

"California is suffering the consequences of resting on past reputation and outdated policies--or no policies at all to guide some critical aspects of higher education--and is producing young generations not as well educated as we need," said Shulock.

According to the press release, the report cited "a lack of effective coordination across all higher education, no state-level planning and an ineffective policy leadership" as some of the issues leading to the system's downward trend.

"California needs to take a systematic, statewide approach in reversing these performance trends," said Robert Shireman, national education leader with the California Competes Council. Shireman also added that the report should help improve the state's higher education system so that Californians can regain a competitive edge.