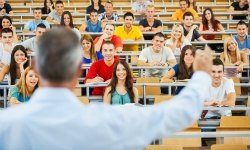 Studies have shown that college professors tend to be more politically liberal than the population at large, and a new survey released last week suggests they are moving even further in that direction -- and quickly. The University of California at Los Angeles Higher Education Research Institute published its 2010-2011 report showing that the number of four-year college faculty members who identify themselves as "far left" or liberal has rapidly increased, while the percentage in the "middle of the road" category has declined. UCLA's HERI surveys faculty members nationwide every three years on a range of issues.

Inside Higher Education showed that attitudes in this survey varied depending on the type of institution. Faculty at private research universities were the furthest to the left, with 16.2 percent of respondents identifying themselves as far left, and only 0.1 percent described as far right. Professors at non-Roman Catholic four-year religious colleges appeared on the other end of the spectrum: Twenty-three percent called themselves conservative while 0.6 percent described themselves as far right.

In terms of gender, women leaned further to the left than men: Inside Higher Education noted that 54.9 percent of women faculty identified as liberal and 12.6 percent as far left. About 47 percent of men said they were liberal, with 12.2 percent leaning far to the left. In terms of tenure track, assistant professors were most likely to be far left, but full professors were more likely to be liberal overall. Those teaching at four-year institutions also tended to be more liberal than those employed by community colleges.

CBS Washington noted that while the new HERI report indicates a clear shift among professors from already liberal ideologies further to the left, it differs from other research that suggests they are doing so from a more centrist position. A 2007 study profiled in Inside Higher Education suggested that professors were more likely to be centrist than liberal, and tended to identify themselves as only "slightly liberal."

Sylvia Hurtado, HERI director, told Inside Higher Education that she cannot explain why faculty members appear to be surging to the left; however, she suspects an age may be a factor. She also suggested that the media's emphasis on the results could be misplaced because various studies show that left-leaning professors neither transfer their views to students nor require agreement with their political beliefs.

Daniel Klein, a professor of economics at George Mason University, disagreed. Klein, who has researched faculty political attitudes extensively, said in Inside Higher Education that academics should worry about how reports like the UCLA survey can impact public opinion. Klein warned there may be a price for being seen by many as outside the mainstream.

"For all the people who are skeptical of the left, and that's a lot of people, they will see academe as this vast apparatus of leftist groupthink," said Klein.