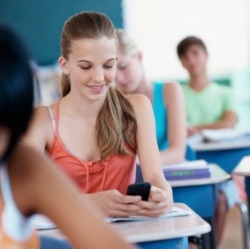 If you think college students are using their electronic devices to take notes during class, think again -- a recent survey showed that most students use their laptops, tablets and smartphones for non-academic activities while in class.

According to UNL Today, Bernard McCoy, associate professor of broadcasting at the University of Nebraska at Lincoln, noticed that students' digital devices were creating challenges for him in the classroom.

"They've got their laptops open, but they're not always taking notes," explained McCoy in UNL Today. "Some might have two screens open -- Facebook and their notes."

The use of digital devices among college students has only increased through the years and it is not expected to slow down any time soon. As UNL Today pointed out, a 2012 study showed that two thirds of students age 18-29 own a smartphone, while a 2013 Experian Marketing Services study found that 18- to 24-year-olds send and receive almost 4,000 text message a month. McCoy noted that using digital devices has become so ingrained in today's college students that "they do it without even thinking about it."

"I feel like the new generation has to know every move that everybody is making at every point in time," Conway said in the Lincoln Journal Star. "It becomes a habit. Sometimes I don't even think about it when I pick up my phone."

As a result, McCoy explained that he has had to re-think how he uses classroom time. For example, he limits the length of his lectures in order to give students periodic breaks. He also encourages students to use their smartphones for classroom-related activities, such as looking up information related to the lecture topic. Inside Higher Ed noted, however, that McCoy said it is still important to better understand why students feel the need to use their devices for non-academic purposes during class time.