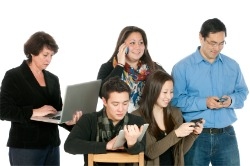 A recent report by the Pew Research Center's Internet & American Life Project shows that college students use the Internet and own tech gadgets more than the rest of the general public.

According to the report, young adults ages 18 to 24 were much more likely than the general public to surf the web, use social networking sites and own a wide range of tech gadgets. However, Internet usage and gadget ownership varied by educational background. For example, 92 percent of 18-24 year olds who do not go to college said they were Internet users, while nearly 100 percent of undergraduate and graduate students said they were online.

While all young adults are more likely than the general public to use social media, non-students were slightly more active--88 percent of non-students reported using social networking sites, compared to 78 percent of community college students, 82 percent of graduate students and 86 percent of undergraduates.

In terms of gadget ownership, undergraduate and graduate students have more tech toys than both community college students and college-aged non-students. Specifically, more undergrads and grads owned a laptop, iPod or mp3 player and e-book reader. Additionally, more graduate students than students of other educational backgrounds owned a desktop computer.

The report also showed that more undergraduate and graduate students than community college and non-students were more likely to have fast Internet connections. Sixty five percent of community college students reported that they access the Internet on their mobile phones, slightly more than non-students (61 percent), undergraduates (63 percent) and graduates (52 percent) and significantly more likely than the general mobile phone owner population (41 percent). According to The Chronicle of Higher Education, Pew senior research specialist Aaron W. Smith attributed this to a trend found in a previous Pew report--smartphone owners with low income tend to access the Internet primarily via their phones.

Data for the Pew Internet Project report was collected throughout 2010 and included responses from nearly 10,000 young adults.