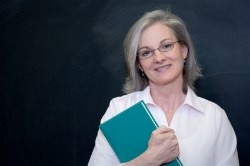 While efforts have study-shows-been made to attract more females toward STEM (science, technology, engineering and math) careers, the outlook is less than bright for female faculty working in those fields.

A study to be published today in the journal Science shows that a century could pass before an equal number of female professors as males are teaching at the college level in science and engineering fields, according to The Chronicle of Higher Education.

Deborah Kaminski of Rensselaer Polytechnic Institute in New York, who did the research along with Cheryl Geisler of Simon Fraser University in Canada, explains the extensive time frame this way.

"[It] will take us maybe 40 or 50 years before we are hiring (women) at 50 percent and then another 40 to 50 years before that effect washes through the system," Kaminski told LiveScience. "It's going to be 100 years."

One reason for this is that the number of women being hired in the science and math fields is increasing slowly, Geisler told The Chronicle.

"In the last four years, we're seeing 27 percent of new hires in science and engineering are women," she said. "It was 25 percent earlier in the decade, so it's just been creeping up."

On the positive side, however, the study does show that once hired in some STEM jobs, women are staying in their positions as long as men. That median time is reported as 11 years overall.

"This is really good news," Kaminski was quoted in LiveScience as saying. "It means if we hired [women], we we going to be able to keep them."

The one exception to these results was the field of math, where women leave sooner than men, according to a Rensselaer news release. Women are reported to leave their positions just after a median 4.45 years invested in the field compared with 7.3 years for men. Otherwise, the study of nearly 3,000 assistant professors hired since 1990 in the science and engineering fields at 14 U.S. universities, showed pretty equal retention rates. The study was funded by the National Science Foundation ADVANCE program.

"On the whole, men and women faculty are being retained at the same rate," Kaminski said in the news release. "This is great news and an important step toward the goal of fostering gender diversity in science and engineering programs across the country. Something is working well. In the case of mathematics, we're not quite sure what's going on, but we're convinced it merits a closer look and further study."

However, she also did express concern about the 11-year retention rate in academia. Rensselaer reported that recruiting new faculty is expensive. Also, until they start bringing in research funding, new instructors can cost more to employ in their first couple of years.

"We think this study could be an important reference point to help obviate many practical and financial reasons for why all universities should arguably be spending more time, energy and resources on retaining younger faculty," she said in the news release.