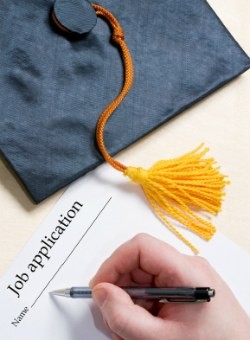 A study has found that hiring is expected to increase modestly for new college graduates and should continue growing steadily.

According to the Michigan State University's annual Recruiting Trends study, hiring is expected to increase four percent across all degree levels for current students--an increase of 10 percentage points over the previous year. The study surveyed over 3,300 employers, of which 40 percent said they planned to hire college graduates.

"We think this growth is going to be more solid," said Phil Gardner, director of MSU's Collegiate Employment Research Institute, who was quoted by the Lansing State Journal. "There are more opportunities, there's more optimism, there's more certainty in the market. But it's only going to go to those students who are ready to work."

Hiring is predicted to be especially strong for new graduates with bachelor's degrees, with a seven percent increase in available jobs. Similarly, students with MBAs will see a 6.4 increase. Hiring of graduates with doctorate degrees will increase the most at 12 percent.

The survey found that students with majors in engineering, computer science, accounting, agriculture sciences and agriculture business, and some science major disciplines will likely see the strongest hiring. New graduates with degrees in communications, public relations, marketing, finance and economics should also have more job opportunities.

As The Chronicle of Higher Education pointed out, the survey found that computer science continues to be one of the most employable degrees. The field has more available positions than qualified graduates.

According to the survey, hiring is predicted to increase in all areas except the Northwest. The area with the strongest hiring is expected to be the south-central region, followed by the Southwest and Southeast.

While Gardner was hopeful, he cautioned that the situation could change. "I'm optimistic that the expansion of the college labor market can last all year, and can set the table for the next few years to come," he said in a Michigan State University news release. "But that doesn't mean that the wheels can't come off. There are huge problems out there--from the economic problems in Europe to the debt crisis in the United States to next year's election--that could really disrupt this."

That caution was echoed by Doug Stites, CEO of the work force development agency Capital Area Michigan Works, who was interviewed by the Lansing State Journal. "We're slowly rising but it's so painfully slow," he said. "(Job growth is) not enough to absorb the people we've laid off, not to mention the people who are coming in."