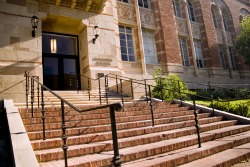 A new study of 30 highly selective colleges conducted by a Harvard University researcher found that legacy applicants--students who have a family connection at a school--have a significant advantage in admission.

The study, led by Michael Hurwitz, a doctoral student at the Harvard Graduate School of Education, revealed that applicants to a parent's alma mater had, on average, seven times the odds of admission of nonlegacy applicants, The New York Times reported. By comparison, students whose parents did graduate work there or who had a grandparent, sibling, aunt or uncle who attended the school were only twice as likely to be admitted.

"It's fundamentally unfair because it's a preference that advantages the already advantaged," said Richard D. Kahlenberg, a senior fellow at the Century Foundation, a nonprofit research organization. "It has nothing to do with the individual merit of the applicant."

Hurwitz says legacy or nonlegacy status matters a lot to individual applicants; however, because applicant pools are so large, legacy admits do not greatly decrease the chance that other students will get into the college of their choice. Of more than 290,000 applications he examined, only about 6 percent had legacy status.

Dean of Undergraduate Admission at Stanford University Richard Shaw, on the other hand, emphasizes that legacy status does not guarantee that an applicant will be admitted to an elite school, The Stanford Daily noted.

"The reality of this is that the majority of students that are legacies do not get in," Shaw said. But legacy students are very strong candidates, he said.

"In looking at our quantitative measures, our legacy enrollees or admits tend to be stronger than the median of the admitted class," Shaw said. "It shatters another perception that unqualified or less qualified students are getting into Stanford because they are sons or daughters of parents who have come before them."