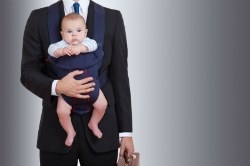 Despite believing in equally-shared parenting, men use their paternity leave to work whereas women use it for child care, a new study showed.

In the study, "Gender Roles and Infant/Toddler Care: Male and Female Professors on the Tenure Track," the researchers surveyed 181 married, heterosexual, tenure track professors, male and female, all of whom had children under age two and access to paid parental leave, The Wall Street Journal reported. It asked them about their handling of child-care tasks, including feeding, bathing and changing diapers.

Three of 109 men surveyed reported that they did 50 percent or more of the child care. This compared to 70 of the 73 women surveyed. This held true even when both spouses worked full-time.

Findings also showed that male professors who took paid leave used a majority of their time on tasks other than infant care, like finishing articles and conducting research. Their female counterparts, however, used the time to do a significant majority of infant care duties in addition to breastfeeding. A report of the study appeared in the January issue of the "Journal of Social, Evolutionary, and Cultural Psychology."

One potential reason for the gender disparity is that women enjoy child care more than men.

"This conclusion is possible even though the vast majority of female respondents and a clear majority of male respondents believe that husbands and wives should share child care equally," according to the report. "Gender ideology about care may be less important than feelings on these matters."

Whatever the reasons, post-birth paid leave for both genders could be handicapping women, as men are using the time to further their careers. This potentially nullifies the original goal of maternity leave, to help level the playing field for women trying to earn tenure while raising children, a University of Virginia news release about the study noted. However, the addition of paternity leave may actually undermine women's equality in academia, said Steven Rhoads, a political scientist at the University of Virginia, who co-authored the study with his son, Christopher Rhoads, an assistant professor of education at the University of Connecticut.

"In this area, refusal to take sex differences seriously, rather than helping women, leads to a policy that could injure females seeking tenure by giving their male counterparts an unfair advantage," he added. The study noted that only about 12 percent of men utilized their post-birth, paid leave option, but "if men should begin to take leave in much larger numbers, far from leveling the playing field, gender-neutral, post-birth leaves are likely to tilt the field further in favor of men."

Therefore, the researchers suggested that paternity leave should be revisited and possibly eliminated.

"It appears that we should seriously consider restricting paid post-birth leaves in academia to women," the report said, as quoted by The Boston Globe.

"What Do Dads Actually Do on Paternity Leave?" articles.boston.com, February 29, 2012, Kara Baskin