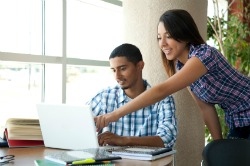 This finding is based on a study conducted by the Pew Hispanic Center. Researchers analyzed newly available U.S. Census Bureau data and found that 349,000 new Hispanic students aged 18 to 24 enrolled in college between 2009 and 2010. In comparison, black enrollment rose by 88,000, Asian American enrollment rose by 43,000 and white enrollment dropped 320,000.

According to The Washington Post, this growth in enrollment has caused Hispanic students to surpass blacks on college campuses for the first time--there are now 1.8 million Hispanic students enrolled in U.S. colleges, compared to 1.7 million black students. However, white students still make up the majority of college students. Despite declining, the group still accounts for 7.7 million students. Enrollment was 8 million in 2009.

The gains in Hispanic enrollment are a result of growth in the Hispanic population--which increased seven percent between 2009 and 2010--as well as an increase in the number of Hispanics graduating from high school and pursing postsecondary education. In 2009 college attainment was 27 percent. In a single year that figure went up five percentage points, to 32 percent.

Although this is a significant increase, Raul Gonzalez, the legislative director for the National Council of La Raza, told CNN that "a spike does not a trend make".

"We are hoping that this carries through to be more of a trend," he added.

Gonzalez also accredited the gains in Hispanic enrollment to the No Child Left Behind Act.

"It's been about a decade of the 'No Child Left Behind' policy. We are one of the few groups that still likes that law," Gonzalez said. "I don't think it's coincidental that (the increased Hispanic enrollment is) coming at a time when a cohort of kids has gone through a school career under 'No Child Left Behind'."

According to The Washington Post, Hispanic students are almost as likely to go to a community college as they are a four-year university. Whites and Asians, on the other hand, are more likely to attend a four-year institution.