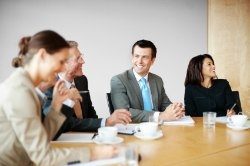 Overconfident employees in the workplace might be unfairly deemed more competent than less outspoken employees, leading to potential advantages when it comes to advancement and promotion.

This conclusion comes from a study, "A Status-Enhancement Account of Overconfidence," coming out of the University of California, Berkeley's Haas School of Business and to be published in the Journal of Personality and Social Psychology, according to a UC Berkeley press release.The study, co-authored by Associate Professor Cameron Anderson along with three other researchers, shows that overconfidence may not be a clear showing of ability at all, but yet it has its fair share of advantages.

"In organizations, people are very easily swayed by others' confidence even when that confidence is unjustified," Anderson explained in the press release. "Displays of confidence are given an inordinate amount of weight."

Another experiment showed that overconfident individuals had tendencies to participate more, stay calm in their interactions, and keep a competent tone.

"These big participators were not obnoxious, they didn't say, 'I'm really good at this,'" Anderson said in the press release. "Instead, their behavior was much more subtle. They simply participated more and exhibited more comfort with the task -- even though they were no more competent than anyone else."

Forbes points out that the study might help explain why some celebrities are successful even when their level of true ability is harder to gauge.

"Confident people are more likely to attract social attention than less confident people; they are more interesting to watch and listen to," Anderson said in Forbes. "So Kim Kardashian's success could be in part due to the fact that human beings are fascinated by confident individuals, even when their confidence is unjustified."

The authors hope that their study leads to more objective means of measurement when assessing skill. In an interview with Forbes, however, Anderson indicates that those who are less overconfident should speak up if they don't want to be passed over.

"Fight against the tendency to be a shrinking daisy," he said. "It is far more difficult to succeed if you are working in complete obscurity."

"Alan Sugar Syndrome: How Overconfidence Can Make You More Successful in the Workplace… Even If You Have Less Talent," dailymail.co.uk, August 14, 2012, Sam Shead

"Why Are People Overconfident So Often? It's All About Social Status," vcresearch.berkeley.edu, August 12, 2012