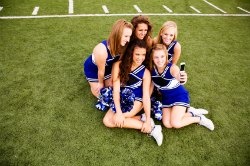 A study released from the National Bureau of Economic Research shows that achieving popularity in high school could result in more economic success later in life. The study, called "Popularity," indicates that being in the upper echelons of popularity while in high school could lead to a 10 percent wage advantage 40 years after graduation.

Data for the study was culled from the Wisconsin Longitudinal Study, which surveyed over 10,000 Wisconsin high school graduates from the class of 1957, according to The Washington Post. Those researchers followed the participants for a period of 50 years and noted worthwhile statistical data points, such as career achievements.

In 1975, some of these participants were asked to write down the names of the three friends they considered to be their closest in high school. These friends were not necessarily of the same graduating year, and could have been younger or older as a result. However, the researchers of the NBER study used these names as the starting point for their study and considered each to be a 'nomination'. They determined that the more nominations one had, the more popular one was in high school.

In all, their analysis found that having an increasing stock in popularity, measured by each additional nomination, resulted in 2 percent higher wages 35 years later. Overall, they also saw that students who moved from the 20th percentile to the 80 percentile of popularity may have experienced a 10 percent pay differential 40 years later.

The authors concluded that the reason participants with more friend nominations were finding an economic advantage is that the social skills they developed in high school could be the same ones to work to their advantage later in life. As a result, they suggested that schools try to better prepare students for success by targeting more than just academics, reported The Wall Street Journal.

"Social interactions within the group of classmates provide the bridge to the adult world as they train individual personalities to be socially adequate for the successful performance of their adults roles," the researchers wrote as quoted by The Wall Street Journal.

Their study also revealed data about some of the characteristics of the students who had more nominations: for example, these students often came from warm family environments and they tended to be smarter and older than their peers.

Of note, the data selected for the NBER study focused on men only. That was to avoid any difficulties that might have arisen from the lower numbers of women employed in the labor force over the course of the study. The data is also primarily reflective of one ethnic group: white, non-Hispanic Americans. Additionally, the researchers did not have information about the actual strengths of the reported friendships.