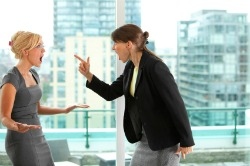 What's the best way to boost creativity? According to a new study, anger with a bit of sarcasm should do the trick.

According to BPS Occupational Digest, researchers conducted three studies in which 375 engineering students were asked to imagine they were a customer service agent and complete a written problem. Before working on the task, however, participants listened to conversations between another service agent and a customer that were either neutral, overtly hostile or sarcastic. Students who listened to hostile conversations performed better at problems that were analytic and did not require additional insight, but worse at problems that required lateral thinking and discovery. According to researchers, observed anger caused participants to focus strictly on immediate priorities in order to avoid suffering.

Students who listened to sarcastic discussions, however, performed the best on the problem. Researchers suspected that this happened because the hint of humor made the situation less threatening and offset some of the damage anger could have done. Additionally, sarcastic comments require listeners to actively make sense of the situation. This in turn seemed to encourage more complex thinking, making participants approach and evaluate situations from different perspectives.

The study was published in the Journal of Applied Psychology.

"Others' anger makes people work harder not smarter: The effect of observing anger and sarcasm on creative and analytic thinking," psycnet.apa.org, May 16, 2011