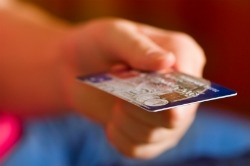 The study, called "The Campus Debit Card Trap: Are Bank Partnerships Fair to Students?", reveals a number of factors about these debit card agreements. For instance, banks are the ones that benefit from them, not students. Even though banks are not allowed to charge fees at their own ATMs, they can charge fees when students use their cards at other banking institutions' machines. These charges can sometimes be up to $5 per transaction, the study noted. Additionally, schools also benefit more. The study points out that one school -- Ohio State University -- will receive $25 million in payments over the next 15 years due to an agreement with Huntington Bank.

Although students do have choices and can turn down such cards, the marketing techniques used by some of the financial institutions are described as "potentially aggressive," noted the study.

According to The Consumerist, some 900 colleges have partnerships with financial institutions, including 32 of the country's 50 largest four-year public schools. The study also pointed out that 26 of the top 50 community colleges and six of the top 20 private not-for profit schools also have agreements.

"Campus debit cards are wolves in sheep's clothing," said Rich Williams, a U.S. PIRG Higher Education advocate, in The Consumerist. "Students think they can access their dollars freely, but instead their aid is being eaten up in fees."

U.S. Bank had the highest number of existing contracts with schools -- at 52 campuses -- while Wells Fargo had agreements in place at some of the largest campuses. Higher One, however, had the most agreements with schools overall -- at some 520 sites. In fact, some 80 percent of Higher One's revenues in 2011 -- $142.5 million -- came from fees associated with student use of such cards, reported The Consumerist.

According to the study, more than 9 million students attend these schools, meaning that 42 percent of all higher education students nationwide have the option of signing up for such cards and are exposed to so-called "potentially aggressive" marketing techniques.

Schools not only benefit from incentives provided through these contracts but also through savings. For example, Lane Community College in Eugene, Ore., looked to save $100,000 annually over a five-year contract with Higher One that would outsource the responsibility of disbursing grants, scholarships and loans to students, according to The Register-Guard.

The school, however, is now considering dropping or modifying its agreement due to student displeasure expressed about the card fees.

"What's the better thing to do: increase the number of staff and pass (disbursement costs) on as tuition to each student? Or have less cost to the college, try to educate students about what is in their best interest in terms of how they access their financial aid and try to educate them to avoid these other costs?" said LCC President Mary Spilde, in The Register-Guard.

The study encourages the U.S. Department of Education to take a number of steps to help students, including updating its regulations regarding disbursement, provide improved transparency, and eliminate high fees for transactions.

"The campus debit card marketplace is tilted so that students can't get a fair deal," said Ed Mierzwinski, report co-author and U.S. PIRG Consumer Program Director, to The Consumerist. "Campus administrations and policy makers have the power to clean it up."

"The Campus Debit Card Trap: Are Bank Partnerships Fair to Students?" uspirgedfund.org, May 2012