Study Shows Taking Your Dog To Work May Lower Stress 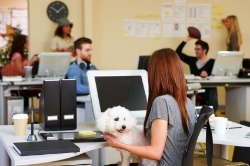 Taking your dog to work with you may lower your stress and improve your job outlook, according to a new study released out of the Virginia Commonwealth University.

"Dogs in the workplace can make a positive difference," lead investigator Dr. Randolph T. Barker, professor of management at the university's school of business, said in a VCU press release. "The differences in perceived stress between days the dog was present and absent were significant. The employees as a whole had higher job satisfaction than industry norms."

In the preliminary study, researchers looked at stress, job satisfaction, organizational support and commitment in three groups of employees: those who take their dogs to work, those who don't and those without pets. The study took place over a week's time at Replacements Ltd., a retail company located in Greensboro, N.C., that has about 450 workers. Some 20 to 30 dogs are brought to work each day by employees.

The results, published in the March issue of the "International Journal of Workplace Health Management," showed that all three groups started their work days with about the same amount of stress. Throughout the day, however, stress decreased in owners who took their dogs to work while it increased by nearly double for non-pet-owners and owners who left their dogs at home. Of the employees who took their dogs to work, 50 percent said they felt their pet increased their productivity, CBS News reported.

According to the press release, the research team also observed that the presence of dogs seemed to improve the countenance of workers who did not have a pet there. For example, some employees asked if they could walk others' dogs. Additionally, several people participating in the study made positive comments about the presence of the animals in the workplace, such as "Having dogs here is great stress relief" and "Dogs increase coworker cooperation."

"Pet presence may serve as a low-cost, wellness intervention readily available to many organizations and may enhance organizational satisfaction and perceptions of support," Barker said.

Not all people, however, are dog lovers, which can cause problems in the workplace.

The Tahoe Daily Tribune noted that an American Pet Products Manufacturers Association national poll revealed that nearly 20 percent of Americans reported that their employers allow pets, including Google and the U.S. Congress. Having pets in the workplace makes people happier, 75 million Americans said in that same survey, and improves relations between co-workers, 41 million said.

"Benefits of Taking Fido to Work May Not be Far 'Fetched,'" news.vcu.edu, April 30, 2012, Sathya Achia Abraham