Study Shows That Fantasy Football Has Little Impact On Productivity 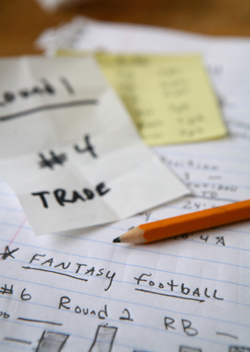 Fantasy sports fanatics may find some comfort in a recent survey conducted by global outplacement consultancy Challenger, Gray & Christmas, Inc. According to the firm, human resource professionals from around the country do not care if employees manage their fantasy football teams while at work.

Challenger, Gray & Christmas, Inc. conducted an online survey of approximately 100 human resource professionals between the end of August and late-September and found that a majority of respondents said fantasy football had little to no impact on productivity. Survey participants were asked to rank the level of distraction on a scale of 1 to 10, with 1 being no noticeable impact. Nearly 70 percent gave fantasy football a four or lower. Less than eight percent rated the activity a 7 or 8 and none of the respondents gave it a 9 or 10. Furthermore, 46.2 percent said they did not care if workers spent time on fantasy football as long as their performance and productivity were not affected.

Network World reported that John Challenger, the CEO of Challenger, speculated that most companies turn a blind eye to the activity because workers now have the ability to work when not in the office. In other words, as long as employees are getting their work done, HR can tolerate fantasy football in the office.

HR managers may also be more forgiving of the activity because they participate in the sport as well. According to the survey, many of the respondents themselves--65 percent--participated in a fantasy league with friends or coworkers.

According to the survey, fantasy football has become so popular that it may be difficult for employers to stop it anyway. A 2008 study by the Fantasy Sports Trade Association estimated that 27.1 million Americans play fantasy sports and approximately 75 percent of them played fantasy football.

Challenger cautioned against banning or limiting employees' fantasy football careers as that may have more negative effects on productivity and morale. "Managers should only crack down on those whose work is clearly suffering from the added distraction. An across-the-board ban on all fantasy football or sports websites could backfire in the form of reduced morale and loyalty," explained Challenger.