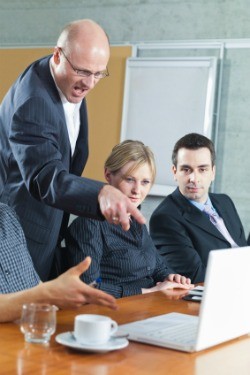 A new study shows that being nice does not pay off in the workplace.

Researchers found that men who were below average on measures of agreeableness earned $9,772 more annually--or about 18 percent more--than nice guys, reported The Wall Street Journal. For women, the difference was not as drastic--ruder women earned $1,828 more--or five percent--than their nicer counterparts. As an article from Mendoza College of Business stated, "agreeableness" is one of the dimensions used to describe human personality and refers to a person "who is warm, sympathetic, kind and cooperative (in short, a 'nice' person).

According to The Wall Street Journal, researchers analyzed nearly 20 years of data from three different surveys that interviewed some 10,000 workers from a variety of fields, salaries and ages. Additionally, they conducted their own separate experiment with 460 business students. Researchers asked the students to pretend that they were human resources managers for a fictional company. Each read short descriptions of candidates for a consultant position. Men who were described as highly agreeable were less likely to get the job.

"Nice guys are getting the shaft," said Beth A. Livingston, an assistant professor of human resource studies at Cornell University's School of Industrial and Labor Relations and co-author of the study.

Researchers stated that the reason may be due to stereotypical expectations of men and women. Study co-author Charlice Hurst, assistant professor of organizational behavior at the University of Western Ontario's Ivey School of Business told The Globe and Mail that competitiveness and seeking career advancement are stereotypical male traits. "And this finding shows that [men] get heavily penalized and viewed more negatively for not meeting expectations of their gender."

In the Mendoza College of Business article, Timothy A. Judge of the University of Notre Dame added, "If you're a disagreeable man, you're considered a tough negotiator, but the perception is that if a woman is agreeable, she gets taken advantage of, and if she is disagreeable, she's considered a control freak or 'the B-word'."

Still, Hurst noted that other factors may contribute to the difference in pay. The Wall Street Journal also noted that some companies have a strict "no jerks and divas" policy.

"We are not about being 'nice' or 'agreeable' or 'civil'," said Kathy Savitt, Chief Executive and founder of social-commerce company Lockerz. "We have a lot of robust debates about all kinds of things. But we do stress the notion of being respectful."

"Do Nice Guys--and Girls--Really Finish Last? The Joint Effects of Sex and Agreeableness on Income," nd.edu

"Research shows men get ahead for being 'disagreeable' in the workplace; women don't," business.nd.edu, August 3, 2011, Shannon Chapla