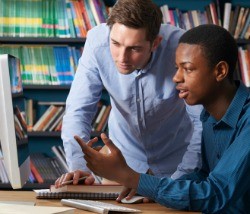 While the U.S. population continues to grow more racially diverse, a new study from Georgetown University indicates that this diversity is not reflected in American colleges. In fact, one potentially controversial research finding suggests that schools with affirmative action policies in place to curb segregation may have an even more sluggish integration rate than those that do not factor race into admissions.

Inside Higher Education reports that Georgetown professor Peter Hinrichs presented research before the American Economic Association on Friday, detailing segregation trends among U.S. colleges and universities. Using federal data filed from every college, Hinrichs determined that the integration of black and white students within higher education has slowed tremendously since the civil rights era of the 1960s.

"There's basically less segregation over time, but it was falling faster in the late '60s and early '70s," Hinrichs told The Huffington Post.

According to The Huffington Post, Hinrichs used two measures to determine the extent of desegregation at American institutions. The first he called "exposure," which is the extent to which constituents of a certain group are exposed to constituents of another group. To do this, Hinrichs determined the percentage of African American students at predominantly white institutions of higher education, and vice versa. The second measure Hinrichs used was "dissimilarity," or the degree to which members of different groups are separated at colleges nationwide. Hinrichs told The Huffington Post that he created a "dissimilarity index" based on the information he gathered.

As reported by CBS, Hinrichs discovered that, as the civil rights movement and court rulings resulted in predominantly white colleges recruiting black students, the index moved significantly towards desegregation. In 1968 the index was 63.9 percent; by 1972, the index had dropped to 52.5 percent. However, since then, further movement towards desegregation has been modest, and by 2009, the figure had dropped only a few points, to 48.0 percent.

Inside Higher Education reports that another, possibly surprising trend presenting itself in Hinrich's research is that affirmative action policies may actually slow the desegregation of colleges. According to the report, Hinrich found that states that eliminated race-based admissions policies -- California, Florida, Texas and Washington state -- actually saw an increase in black students' exposure to white students and a decrease in their similarity indexes. In other words, the data suggest that affirmative action may not always achieve its intended goal of racially integrating colleges and universities.

According to The Huffington Post, Gawker's Hamilton Nolan wrote that it should not be inferred from the report's findings that segregation is a thing of the past in America. As Hinrichs noted, the African-American population is not evenly distributed across the country, and most students go to college near their home.

And Hinrichs, who describes himself as neither a proponent nor a critic of affirmative action, told Inside Higher Education that he does not mean to suggest that states should ban affirmative action, as valid reasons still exist for people to want to ensure higher levels of black enrollment at elite institutions than might be the case without affirmative action.

But Hinrichs also wrote that the data illustrates that "it is plausible that an affirmative action ban could decrease measured racial segregation."