Study Shows that Women Perform Better in College Than Men 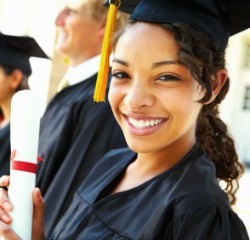 Gender inequality in U.S. colleges is alive and well, though contrary to popular perception, in this case women actually outperform the men. According to a new book written by two sociology professors, women are more likely than men to attend college and perform better academically once there. Schools must address this widening achievement gap, the authors wrote, if they want to prevent economic consequences.

In "The Rise of Women: The Growing Gender Gap in Education and What It Means for American Schools," Tomas DiPrete of Columbia University and Claudia Buchmann of Ohio State University explore why women have an academic edge over men and what schools can do to motivate more men to succeed. Inside Higher Ed reports that bachelor's degree completion among men slowed significantly beginning in 1950 while women's attainment progressed. By 2010, 36 percent of women had graduated college compared with 27 percent of men. Today, women's college enrollment outstrips that of men by a ratio of 1.4 to 1.

"We've seen astonishing change over a very short historical period," DiPrete said on a call with reporters, as reported by Inside Higher Ed.

According to The News-Times, the authors contend that the academic gender gap begins as early as kindergarten where girls often appear more persistent, demonstrate better self-control and find more gratification from performing well -- skills that give them a learning advantage. By middle school, girls are more likely than boys to enjoy school and study.

"The flip side of course, is that boys' lower engagement in school leads to weaker preparation, and then reduces their chances of getting through college," Buchmann told Inside Higher Ed. She notes that the problem is minimized in strongly academic schools, however, which could be a key for motivating boys. "We really need schools that set high expectations, that treat students as individuals - not just as gendered groups," she said.

According to Inside Higher Ed, "The Rise of Women" suggests that gender stereotypes may also contribute to the education gap. Boys have historically been trained to believe that they do not have to obey the rules or work hard, they write, because they could earn good wages in fields that did not require higher education, like manufacturing, construction or travel. Times have changed, and according to DiPrete, today's young men are "overly optimistic" about their ability to earn a living wage without completing college, and subsequently "under-invest" in academics.

The rise of women in the classroom does not necessarily translate to progress in the workplace. The authors note that women still lag behind men in earnings and promotions and do most of the housework and child rearing as well. In a column he penned for The Atlantic, University of Maryland -- College Park sociology professor Philip Cohen wrote that there is also evidence that women's academic progress is beginning to slow, and that men and women engage in segregation when it comes to their academic disciplines. Women lag in science and technology fields, for instance, which tend to be lucrative majors.

"The biggest problem for gender inequality among the college-educated remains the lack of gender integration across fields of study," writes Cohen. "Men and women still largely educate themselves in different fields, with dramatic implications for their career trajectories and earnings throughout their lives."

"A New Book That (Finally) Tells the Truth About the Rise of Women," theatlantic.com, February 20, 2013, Philip Cohen