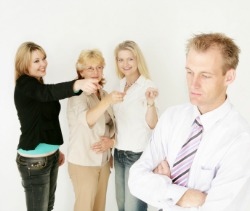 Most of us would like to think we have outgrown the days of judging and treating others based on physical appearance. However, whether we admit it or not, a growing body of research shows that physical appearance may influence many aspects of the workplace, from interviewing and hiring decisions to earnings and overall career advancement and success. A new study now adds another twist by revealing there may be a link between unattractiveness and bullying in the office.

As reported in Notre Dame News, the study "Beauty, Personality, and Affect as Antecedents of Counterproductive Work Behavior Receipt" analyzed bullying in the workplace and its effect on workers. In order to carry out their investigation, researchers Timothy Judge, professor of management at the University of Notre Dame's Mendoza College of Business, and Brent Scott of Michigan State University surveyed 114 health care employees and asked how often they felt bullied by co-workers. "Bullying" was defined as counterproductive behavior such as saying hurtful things, acting rudely, teasing and other forms of cruelty that could negatively affect one's job performance. Separately, other study participants who did not know the employees looked at photos of them and judged their physical appearance. Results showed that workers whose photos were rated as unattractive tended to be more likely to report being bullied at work. The study is the first to look at the relationship between physical appearance and workplace bullying.

"Our research is novel because it focuses on how coworkers treat attractive and unattractive colleagues," said Judge in Notre Dame News. "We find that unattractive individuals are more likely the subject of rude, uncivil and even cruel treatment by their coworkers."

Bloomberg Businessweek pointed out that physical appearance as well as personality could play a role in how others treat colleagues at work. According to Psych Central, this is known as the "halo effect": good-looking individuals usually project more self-confidence, which in turn makes others perceive them in a more positive way. Conversely, Bloomberg Businessweek noted that individuals who may be unattractive and lack self-confidence might be more prone to bullying. The Wall Street Journal also noted, however, that researchers did not pinpoint exactly why unattractive employees were more often targets of bullying.

Bullying in the workplace has become a serious issue in recent years with considerable research published that illustrates the benefits of beauty in the labor market. Yet, despite the evidence, Judge noted many are still unaware the problem exists and not willing to admit that looks may affect the way they treat others at work. Bloomberg Businessweek noted that some might see the aggressiveness as just part of the workplace culture, an attitude one must have in order to get ahead.

"Awareness is surely one important step," said Judge in Notre Dame News. "If we recognize our biases and are more open and honest about their pervasiveness, we'll be in much better shape to combat the influence."