Study Shows Women Leave Engineering Because Of Lack Of Confidence 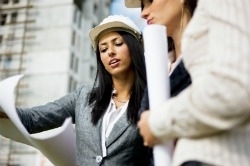 Women who leave the engineering field do so because of lack of confidence and not because they want to start a family or don't believe their math skills are strong, a study in the October issue of the American Sociological Review noted.

According to The Chronicle of Higher Education, women appeared to be less than confident when it came to having the needed skills for their profession and being sure that their career path was in line with their interests and values.

"The more confident students are in their professional expertise, the more likely they are to persist in an engineering major," Erin Cech, a postdoctoral fellow in sociology at Stanford University was quoted in The Chronicle as saying. "However, women have significantly less of this expertise confidence than do men."

Cech, along with Brian Rubineau of Cornell University, Susan Silbey of the Massachusetts Institute of Technology and Caroll Seron of the University of California at Irvine, carried out the study. They are all part of the Clayman Institute for Gender Research at Stanford University. The school itself has a prominent engineering program, according to Live Science.

Nearly 300 male and female students starting engineering programs in 2003 were interviewed in the study. Researchers interviewed these same students again in 2007, asking questions about whether they planned to stay with engineering and pursue a career in the field. The students came from the following schools: the Franklin W. Olin College of Engineering, the Massachusetts Institute of Technology, Smith College and the University of Massachusetts.

As noted in a press release, Cech pointed out that although the study sample was small, there was little evidence to suggest that women were leaving the engineering field because of a desire to start a family or because of negative self-assessments about math skills. Furthermore, she attributed subtle cultural differences as the reason female engineering students had less confidence than men.

"Often, competence in engineering is associated in people's minds with men and masculinity more than it is with women and femininity," said Cech in the press release. "So, there are these micro-biases that happen, and when they add up, they result in women being less confident in their expertise and their career fit."

She offered several recommendations as to what to do to encourage women to stay in engineering. These included bringing practicing engineers, who can address the issue of confidence, into the classroom. There could also be panels of women, sponsored by women engineering organizations, who could address gender-based issues related to the field. These female engineers could act as support for students.

"It would be good for them to talk about their confidence in their expertise and their confidence that engineering is the right fit for them," Cech said. "If these things can be brought to the forefront and explicitly talked about, it may help women and men engineering students develop confidence of their own."

The study is part of the project, "Future Paths: Developing Diverse Leadership for Engineering," which is funded by the National Science Foundation, according to Live Science.