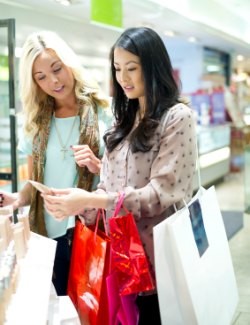 According to a study, even economic hardships cannot stand in the way of women and their beauty products. In fact, the study found that women actually spend more to enhance their appearance during recessions.

As reported by College Times, researchers from Texas Christian University, University of Texas at San Antonio, University of Minnesota and Arizona State University analyzed historical data to determine how economic downturns affected women's spending as well as conducted four other studies with unmarried 18 to 24 year old women and found that, in all cases, women were more likely to buy beauty products--defined as cosmetics, perfumes and designer clothing--during a recession. Why? Researchers claim it is because they are trying to attract a mate with a good job; a phenomenon called the "Lipstick Effect."

"Our findings consistently support the lipstick effect, as college-age women, when primed with news of economic instability, reported an increased desire to buy attractiveness-enhancing goods, along with a decreased desire to purchase goods that do not enhance one's physical appearance," said study author Sarah Hill as quoted by College Times.

Hill told Life Inc. that she was actually surprised by the results.

"I was expecting to find sales of these products to at best be flat when unemployment was high," said Hill. "That would have been interesting enough. But when we found that people were actually spending more during times of high unemployment, I thought that was fascinating."

Hill and her colleagues first encountered the unexpected pattern in 2010, after reading an article on how Mary Kay, Inc. was thriving while the rest of the economy was suffering.

According to The Huffington Post, researchers concluded that during an economic recession the amount of financially stable men drops. As a result, women want to make themselves more attractive in order to find a reliable mate. And, according to the study, women find men with good jobs more reliable because they can afford to raise a child.

While the spending pattern may be true, the reasons behind it are not always agreed upon. For instance, The Huffington Post noted that previous research has shown that consumers tend to spend more on luxury goods during a recession because they are trying to make themselves feel better. Some women also explained that they are willing to spend more on quality products and clothing in order to land a job.

"You can have a really good resume, but you also have to look professional and look like an adult," said Kate Barnes, December 2011 graduate from Arizona State University's Walter Cronkite School of Journalism and Mass Communication, to College Times. "I think that putting yourself together shows that you're responsible and organized."

Still, other women said their tastes simply become more expensive as they mature and that spending more has nothing to do with trying to find a man.

According to Life Inc., Hill and her colleagues did not find the same outcome for men and indicated that it would be interesting to see whether men with good jobs do things to advertise that fact to potential mates.