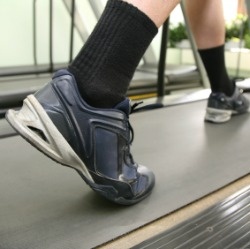 Working in a sedentary job may have its drawbacks. In fact, a growing body of research indicates that countless hours of inactivity can take a toll on physical health. In order to introduce daily physical activity into the workplace, savvy employers have been keeping an eye on a workplace trend for inactive workers: the treadmill desk.

According to Columbia Business Times, a treadmill desk is a modified desk that is added on to a traditional treadmill in order to create an exercise-optional work environment. When using the treadmill desk, employees can stand still or walk at a rate of 1-2 miles per hour. Not only can the additional activity lead to a healthier lifestyle, but the use of the product can reportedly lead to better posture, weight loss, reduced stress, and better workplace focus.

While increased physical activity is almost always considered a good thing, the treadmill desk isn't without its critics. According to Fitness World, many have wondered if workers could maintain productivity and production quality while exercising at the same time. In order to debunk the myths surrounding treadmill desks and workplace productivity, researchers followed 36 workers who volunteered to exchange their regular desk for a treadmill desk for one year. According to the study, published in the journal Obesity, employees using the desks actually improved their baseline productivity after a slight lull as they adjusted to the new set-up.

As Runner's World noted, employees using the desks also decreased the total amount of time that they spent sitting each work day and lost an average of three pounds each. The employees were evaluated at six and 12 month intervals with independent surveys completed by employees and their supervisors. As the health benefits of treadmill desks become more wide-spread, employers may become more willing to offer the option to employees.

"If an employer wants their employees to be more productive, healthier and more of a financial asset to the corporation they need to realize the importance of keeping employees upright and moving during the day," stated Steve Bordley, CEO of TrekDesk, a distributor of treadmill desks, as reported in Fitness World. "All of the initial objections have been disproved through careful scientific studies over the years. It is a proven scientific fact that treadmill desks boost mood and productivity, prevent disease and improve mental and physical health."

In an effort to understand the positive effects of workplace exercise, faculty members at the University of Missouri's Department of Nutrition and Exercise Physiology also plan on researching the long-term effects of treadmill desks in the workplace. The chair of the department, Chris Hamlin, said he uses his treadmill desk for 90 to 95 percent of his workday. According to Hamlin, he is able to complete all of his job responsibilities while standing and walking.

"I even eat my lunch on the treadmill, except for soup," Hamlin said in the Columbia Business Times.