Study: Students Choosing Practicality Over Passion When It Comes to College Major 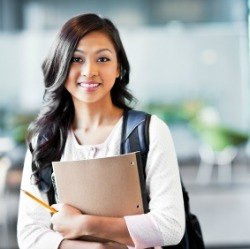 A growing body of research indicates that fewer high school students are choosing their college major based on personal interests. The most recent source of this suggestion comes from the American College Testing's College Choice Report, which shows that only 36 percent of incoming college freshman claim that their choice of college major is a "good" fit in terms of their interests. In addition, another 32 percent of respondents described their college major choice as a "poor" fit.

So, what factors are students considering when choosing a college major? Reportedly, they're considering a myriad of factors, including their strengths, personal interests, and future job prospects. However, the fact that such a small percentage of students chose a college major they're interested in seems to indicate that students are making the choice based on more practical considerations, according to the study. And, with students often picking their college major so early, usually right out of high school, it shouldn't come as a surprise that many college students must change their major after they've already gotten started.

One such example is BU School of Management sophomore, Emily Cloutier. Emily changed her major to business with a concentration in law and finance after learning that her previous college major would require more of a financial commitment than she realized.

"When I came here, I was a psychology major, but then I realized I would have to go to grad school and get a Ph.D. before I could make a living on my own," said Emily to the Daily Free Press. "So I switched for the money and the security of knowing that an SMG degree would get me a job."

With so many students choosing a college major that they're not necessarily interested in, it's important to examine why they're making these decisions and if it could be harmful in the long run. According to Beth Heaton, A former regional director of admissions for the University of Pennsylvania, part of the problem may stem from the fact that young adults often have no idea who they will be several years down the road.

"The vast majority of them have no idea what they really want to do when they grow up. Even the ones who claim that they do," said Heaton to U.S. News & World Report. "How can you know? If you're 16, 17, 18, you know so little of the world."

According to Heaton, students should be spending the first year or two of college figuring out what they want to do with their lives. And, for those who are interested in a particular field or area of study, Heaton suggests that they keep their minds open to any and all possibilities. This is particularly true for students who are afraid to pursue a particular field because they happen to struggle in in a related subject, says Heaton.

"Let's say you love the world of medicine, of helping people get better. Maybe you're not a science person so you're never going to be a doctor, but there are a lot of ways you can work in that industry without having to be on a science side of it," says Heaton to U.S. News & World Report. "Take a broader look at things."