Study Suggests Guilt May Be An Indicator Of Leadership Skills 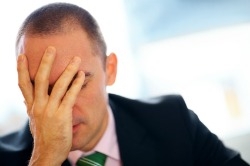 A new study released from the Stanford Graduate School of Business reveals that being guilt-prone could be an indicator of emerging leadership skills in the workplace.

"Guilt-prone people tend to carry a strong sense of responsibility to others, and that responsibility makes other people see them as leaders," said doctoral candidate Becky Schaumberg who authored the study along with professor Francis Flynn, both of Stanford, according to Stanford Graduate School of Business press release.

The study, involving more than 500 participants, featured three specific components. In the first, participants took an online personality test to see if they had tendencies toward being guilt-prone or shame-prone, reported The Wall Street Journal. This distinction ended up being a significant part of the study as researchers concluded that guilt-prone people are more apt to work to correct a problem or mistake and to have remorse about a difficulty whereas shame-prone people are likely to internalize problems and to try to hide from the situation.

Researchers also divided participants into groups and had members rate one another on leadership abilities. The groups were given about an hour to perform tasks, such as devising a marketing campaign for a new product, the press released noted. Researchers found that group members who were rated as having strong leadership skills -- through tasks such as facilitating discussions and taking charge -- also ranked high for being guilt-prone on the personality test. Additionally, researchers asked a group of former managers, clients, and colleagues of current MBA students to gauge students on their leadership abilities. Again, those viewed as having greater leadership skills also rated higher on the personality test for being guilt-prone.

"When thinking about what traits are important for leaders to possess, there tends to be a focus on what people do well," Schaumberg said in the press release. "But we know that people make mistakes and mess up, and it's important to look at how people respond to those mistakes because that's a clue to who they are."

"We think this shows that guilt-prone individuals have a strong sense of duty and loyalty to their groups, and are willing to be good soldiers and go along with what benefits the collective, even if that means some individuals may be harmed," said Schaumberg in CNN.

The study also measured leadership based on extroversion, a trait that is often recognized as a top indicator of leadership. Researchers concluded that guilt was a better indicator of emerging leadership.

"Plagued by Guilt? You May Be Management Material," blogs.wsj.com, May 29, 2012, Rachel Emma Silverman