Study: Workers Are Happy When They Are Paid As Much As or More Than Their Peers 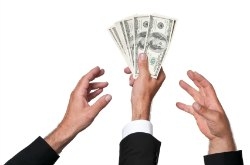 Perhaps it is no surprise that salary and employee happiness are closely linked, but a study suggests that what workers earn relative to their peers may even be more vital. The study, published by Professor Eduardo Pérez Asenjo of the Universidad Carlos III in Madrid, implies that being paid at a rate comparable to that of peers is important.

The study, called "If happiness is relative, against whom do we compare ourselves? Implication for labour supply," was published October 2011 in the Journal of Population Economics. According to the abstract, the study looked to examine two areas: one, the nature in which individuals compare themselves to others, and two, what these social implications could mean for the labor industry.

While details are unavailable about how Asenjo conducted the study, his results indicate that the impact of relative income was greater on men, whites and those who live in rural areas, according to the study abstract. PayScale reported that it also showed that employees who make less than their peers put in more hours on the job. This may be due to a social desire to keep up with others.

"The most likely explanation lies in social comparisons, although it could also be due to the idea that if those around me earn more than I do, it might indicate that if I work hard I will end up earning as much as they do," said Asenjo as quoted by PayScale.

According to a University of Madrid press release, the study could be applicable to labor and human resource management in companies. Asenjo suggests that when setting employee pay, managers might want to consider what they will pay the worker individually as well as what they plan to pay the worker in comparison to his or her colleagues.

"My personal opinion is that employees' happiness is not really taken into account in work environment, from the company's perspective," he said in the press release.

The press release also suggested several follow-up studies that could be done: Are there variations on relative income as defined by age? What are the parameters for forming peer groups? Is it true that the more money one makes the more important it becomes to compare oneself with peers?

"Happiness at work depends on a good salary, but also on how much colleagues earn," uc3m.es

"If happiness is relative, against whom do we compare ourselves?" e-arhcivo.uc3m.es, October 2011

Career and Education News
Home >
News>
Study: Workers Are Happy When They Are Paid As Much As or More Than Their Peers